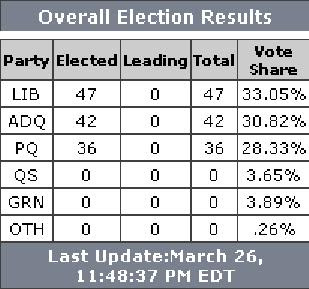 This is the breakthrough ADQ leader Mario Dumont has been waiting for. As for the Parti Québécois, it's hard to say whether the poor showing is because separatism is a dead issue or because people were appalled by leader André Boisclair. Meanwhile, Gliberal leader Jean Charade (a constipator masquerading as a gliberal masquerading as a federalist) apparently just barely hung onto his own seat in Sherbrooke.

Finally, this does not bode well for the Federal Constipated Party of Canada and Prime Mystery Stephen Harpie. He was counting on a Gliberal victory in Québec to boost his own fortunes. The ADQ is an unknown quantity for him, and the PQ, well...you can't cozy up to them too much. They're liable to stab you in the back, eventually, and pack up their kits and leave the country, non?