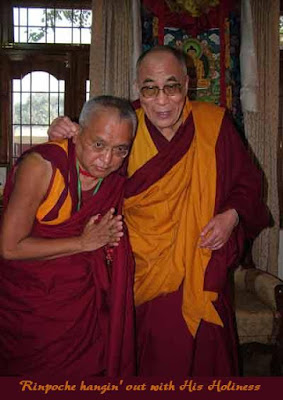 In the last few weeks I've engaged in a spate of downloads. I've been discovering loads of open source applications, some of which may be useful to me, and others which may not but I can't tell until I experiment with them.

One of the definitely useful apps is a program called Audacity, a digital audio editing program. So I've embarked on a new project, something else to occupy my time in the rarefied atmosphere of the Yoni School. They won't let me picnic naked in the garden (and it's still too cold anyway) so I'm going to do this...

When Lama Zopa Rinpoche was here back in August/06, everything he taught was recorded digitally except for one night when somehow the record button didn't get pressed. I have copies of those recordings...geez, how many hours' worth? Must be 20 at least.

Now, Rinpoche is a man after my own heart, a ramblin' guy. I mean, sometimes his talks are quite ramblin'. And he has quite a repertoire of... let's call them verbal tics. In fact he coughs and clears his throat often, which they say is a remnant of his having had TB in his youth. They also say it could very well be a tool he's using in his teaching.

Whatever the reason, sometimes he's hard to follow because of repeated interruptions. So, I've decided to kill two birds with one stone (metaphorically speaking since I've adopted the Buddhist precept of avoiding killing) and learn a bit about this Audacity program and digital editing while cleaning up Lama Zopa Rinpoche's teachings. Not editing for content, mind you, but simply removing some of the more obtrusive instances of coughing and such.

In the recording I'm working on right now, his first afternoon of teachings, the mic placement was maybe not so great, so some of the audio levels are really low. I think Audacity can adjust this, but I don't know how to do it yet, and that will be the next step. Then after that, I need to learn how to split the .wav file into shorter pieces because at the moment they are 2 or more hours long.

If my "experiment" works, we'll be able to produce CDs. I'll keep you posted on my progress. As of this writing I've completed the first (afternoon) session, but only the first phase of the three described above.

Wow Larry, that's great! I'd be interested in getting ahold of the cd when it's finished.

I'm also tagging you for a meme. If you are interested in participating, see the details here http://nowcamillecrawford.blogspot.com/2007/03/goals-meme.html