I wrote a long post on DoveTale Writers a few days ago about Arthur Koestler cuz I'm reading his book Janus: A Summing Up.

In that post I quoted a long passage from the book. Here's a short bit:

With due respect to Shakespeare's 'All the world's a stage', one might say that the ordinary mortal's life is played on two alternating stages, situated on two different levels -- let us call them the trivial plane and the tragic plane of existence. Most of the time we bustle about on the trivial plane; but on some special occasions, when confronted with death or engulfed in the oceanic feeling, we seem to fall through a stage-trap or man-hole and are transferred to the tragic or absolute plane.

Now, the reason I quote this again is cuz I've just been able to re-interpret this in Buddhist terms. Koestler actually uses the phrase "absolute plane". In a way, what he's describing here is the distinction between samsara and nirvana or dharmakaya.

Not to belittle the glories of samsara, but it really is the trivial plane. It's the place where we pick our nose, wiggle our toes, come to blows, pluck the rose, go to shows, suffer woes, lows and purple prose. From the Buddhist perspective, it's trivial because it doesn't actually get us anywhere. We expend tremendous energy doing the same things over and over (the eight worldly dharmas -- working for mere money, fame, reputation, etc.) and at the end have nothing to show for it except the next life where we do it all over again. It's obsessive, like checking your email every five minutes. (Come on, admit it, you've done that...) The Lam Rim teachings urge us over and over again to renounce seeking after this life. In fact, it's the seeking and grasping that propels us into the next cycle.

Unlike Koestler, though, Buddhists would not call the "absolute plane" tragic. Profound, yes. But not tragic. Blissful, yes. Not tragic. But I think this is more what Koestler means, anyway. The absolute plane, the oceanic feeling, is one of great depth, (vast as the sky as Lama Yeshe might say) and profundity. It is a "place" where we move out of our habitual somnambulance into intense awareness of reality. This can and does happen to us in our daily lives. Near-death experiences. Sudden awakenings or realizations. Sudden shocks that make us ponder the evanescence of both beauty and life.

However, what's really prompting this post is another, later, passage in the same book. Koestler here is involved in a long discussion of Free Will vs. Determinism. It's unfair both to you and to him to take pieces out of context, but I have to do it to avoid writing an obscenely long tract. At one point, Koestler says this:

...[T]he present theory implies that the hierarchy [involved in thought and action] is open-ended towards infinite regress, both in the upward and downward direction. We tend to believe that the ultimate responsibility rests with the apex of the hierarchy -- but that apex is never at rest, it keeps receding. The self eludes the grasp of its own awareness. Facing downward and outward, a person is aware of the task in hand, an awareness that fades with each step down into the dimness of routine...and finally dissolves in the ambiguity of the Janus-faced electron. But in the upward direction the hierarchy is also open-ended and leads into the infinite regress of the self. p.238

What he's describing here (or at least, what I hear here) is the Buddhist analytical meditation in which one pinpoints the non-existence of the self. Koestler calls it infinite regress. This, like so many of my ruminations, is a signpost on the path of emptiness. In this meditation, you attempt to define what it is that makes you "you". What part of you is you? And furthermore, where is this "you" located? In the head? In the heart? In the eyes? In the mind? And where is the mind? What is the mind? It has no substance. It has no location. So where are you? What are you? We did this meditation during the course of our Lam Rim instruction, and I must say I experienced a slight nausea at the realization that the I I've lived with all my life has no handle to grasp.

Try it yourself. You'll see that the I cannot truly be found. You'll try to fool yourself by describing characteristics, or beliefs, or behaviours, likes and dislikes. But those are not you. Ultimately, you might decide that you're nothing more than a collection of thoughts, a series of feelings. But even those are totally without substance. They have no more existence than a dream.

Then, on the next page, Koestler writes:

Some philosophers dislike the concept of infinite regress because it reminds them of the little man inside the little man inside the little man. But we cannot get away from the infinite. What would mathematics, what would physics be without the infinitesimal calculus? Self-consciousness has been compared to a mirror in which the individual contemplates his own activities. It would perhaps be more appropriate to compare it to a Hall of Mirrors where one mirror reflects one's reflection in another mirror, and so on. Infinity stares us in the face, whether we look at the stars or search for our own identities. (Italics mine) p.239

Indra's Net. He has just described a fundamental Buddhist cosmology/concept/analogy/myth/tenet. Indra's Net is one of my favourite ways of thinking about interdependence and interconnectedness. Let me quote from another of my "most essential books about Buddhism", which I've talked about in another post:

Far away in the heavenly abode of the great god Indra, there is a wonderful net which has been hung by some cunning artificer in such a manner that it stretches out indefinitely in all directions. In accordance with the extravagant tastes of deities, the artificer has hung a single glittering jewel at the net's every node, and since the net itself is infinite in dimension, the jewels are infinite in number. There hang the jewels, glittering like stars of the first magnitude, a wonderful sight to behold. If we now arbitrarily select one of these jewels for inspection and look closely at it it, we will discover that in its polished surface there are reflected all the other jewels in the net, infinite in number. Not only that, but each of the jewels reflected in this one jewel is also reflecting all the other jewels, so that the process of reflection is infinite.

The Avatamsaka Sutra
Francis H. Cook: Hua-Yen Buddhism: The Jewel Net of Indra, 1977
Here's a computerized, fractal representation of Indra's Net, which I found at this website: 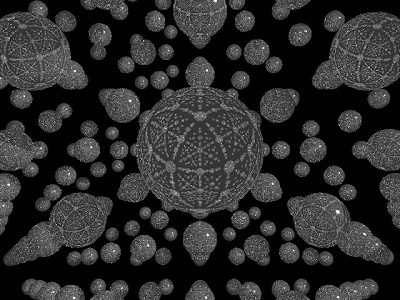 And here is what Ken Jones has to say about Indra's Net, a quote I found on yet another fractal-type website:

Indra's Jewelled Net is a metaphor for the summation of Buddhist thought. Each of us is a jewel in Indra's Net, which replicates the whole and is the whole. At each intersection in Indra's Net is a light reflecting jewel and each jewel contains another Net, ad infinitum. The jewel at each intersection exists only as a reflection of all the others and hence it has no self-nature. Yet it also exists as a separate entity to sustain the others. Each and all exist in their mutuality.

Ken Jones, The Social Face of Buddhism
Here's a thangka with an Indra's Net mandala, or mandala of the cosmos from the Dharmapala Thangka Centre. These guys are no slouches when it comes to the creation of thangkas. 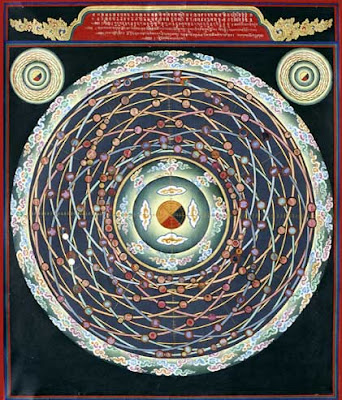 Infinite mirrors reflecting infinite mirrors. It's mind-boggling. And the Buddhists have been meditating on this for a couple of millennia. Modern physics has only just begun to catch up.

As a matter of fact, Koestler delves deeper into the subject in the very next chapter, entitled Physics and Metaphysics. Early on he enumerates some of the terms physicists have come up with to describe certain phenomena: quarks, quarks with 'charm', the eightfold way [!], strangeness, the bootstrap principle...He says that physicists are "well aware of the surrealistic nature of the world they have created."

For on th[e] sub-microscopic level the criteria of reality are fundamentally different from those we apply on our macro-level; inside the atom our concepts of space, time, matter and causality are no longer valid, and physics turns into metaphysics with a strong flavour of mysticism. As a result of this development, the unthinkable phenomena of parapsychology appear somewhat less preposterous in the light of the unthinkable propositions of relativity and quantum physics. (p. 244)

In my world, the last sentence would say: the unthinkable phenomena of Buddhist psychology! What he really means to say here, if he only knew it, is that modern physics is discovering emptiness!

In fact, he quotes David Bohm, a professor of theoretical physics at the University of London: "...one is led to a new notion of unbroken wholeness which denies the classical idea of analysability of the world into separately and independently existent parts..." In other words, interdependent origination.

Tibetan Buddhists, too, have their own jargon, especially in the Vajrayana. Winds and drops play a crucial role in Vajrayana practise. And Koestler comes perilously close to this when he quotes Fritjof Capra:

Nuclear matter is thus a form of matter entirely different from anything we experience 'up here' in our macroscopic environment. We can perhaps picture it best as tiny drops of an extremely dense liquid which is boiling and bubbling most fiercely.

I could go on. But I won't. I'm probably making a point here that others have made much more effectively. I don't know what Koestler thought about religion or if he believed in god or some sort of higher power. It doesn't matter. Unknowingly, he preaches a sort of Dharma. With 84,000 Dharmas taught by the Buddha, it seems that the particular path is less important than the fact that a path has been chosen.

No, do go on Larry, really! This is good stuff. I've just discovered your blog via the marvels of MyBlogLog, and will definitely be coming back.

Thanks John, and congratulations for making it all the way to the end of the post!