Canadian Political Hinterland Hoo's Hoo
Why is this man smiling? 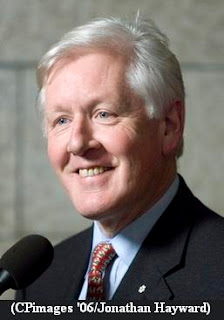 This is a premier specimen of the Silver-Haired Bobrae, who has just been moved from the endangered species list to the "threatened" list, having won his nomination to run for the Gliberal Party of Canada in Hawgtown Centre at the next federal election. A former Near Democrat premier of Ontariario, he joined the Gliberals last year, primarily to run for the leadership of the party, which he lost, which catapulted him onto the endangered list. He has proved to be sturdy and resourceful, however, and may yet come out of the wilderness where he has spent much of his time playing piano for seniors.