Cats Will Be Cats and Cats Play Theremin

OK. By way of preamble, let me say, the next couple of postings will be mostly photos. I'm catching up on some things that have been happening in recent days. Regrettably, I am not necessarily able to be present for all these things, why? Cuz I'm cooped up in the Yoni School. For Wayward Poets.

Nurse Ratchet has only so many gears. Slow and stop. Sometimes when I ask real nice, she gives me the day pass, and the day passes without incident. Wherever that incident might be occurring. But sometimes Nurse Ratchet says "Whoa there, Mr. Keiler, buddy, what do you think this is? Hotel Yoni? Think you can waltz in and out whenever you feel like? Don't forget, this is incarceration! For Miss Phelonius Spelling. And you too! Sit back and do your time, meter and rhyme awright? And don't bother me so much."

Well, first of all, this ain't no incarceration. It's more like incineration, a conflagration of memorization, insanitization of the po-tic nation. Some days she gets me in that vice grip of hers. You know, she turns the little screw and it slowly squeezes until all the little vices floating around in my cranium begin to squirm and I just want to scream, "All right already! I promise I'll conform. I'll perform. I'll reform. I'll bee the speling bee champ for you. VICE! V. I. S. E! VICE!"

And B: Nurse Ratchet, I don't waltz. I can't rhyme in 3/4 time. Four on the floor for me, see? That's the problem. I can't do that ther Yoni Waltz. It ain't no ballroom. It ain't no Johann Strauss Orchestra. It's the Wayward Poets wandering the halls, climbing the walls, kickin' in the stalls, catcalls and pratfalls. And I need to get out of it sometimes, just to be assured that sweet chaos still reigns in the po-tic jungles of Ontariario.

But a day pass is a pass for a day and some days there ain't no way to get a pass for a day. So I have to rely on outside sources, the primary one being HWSRN. He has the run of the roads. I, in my tiny cell flanked by cafetearias and nursetearias and roll-top desks filled with fountain pens and parchment (the tools used by true potes, not we ersatz versifiers) I at least have the run of the Internet, which is not forbidden to us because there are so many resources available to help us rehabilitate our bad language habits. (I've been ordered to stay away from the comments sections of political and news sites, though, because they're overwhelmed with bad grammar and execrable spelling. Sorry, political bloggers and columnists and Yahoonies, but when I see the level of illiteracy, rudity and downright stupidity in the peanut gallery of the Net, it is to weep.)

HWSRN obliges me, however, by providing snippets of outside life. Mostly related to him, of course. I cannot guilt him into starting his own bloody blog. Mine is too convenient for him, and I too desperate for legitimacy.

So. As my friend Veronica Goodheart is wont to say.

Yesterday, HWSRN played the first gig with the Chris Mulligan Band (CMB). I mean, it was their first outing in public, an event called the Come Together Festival. This took place at a place called the Frontier Ghost Town, a rather sad-looking, bedraggled collection of ramshackle buildings and old cars and campsites a little ways outside of Durham Ontariario. Here are a couple of photos of the venue: 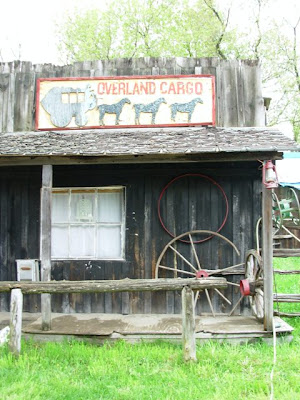 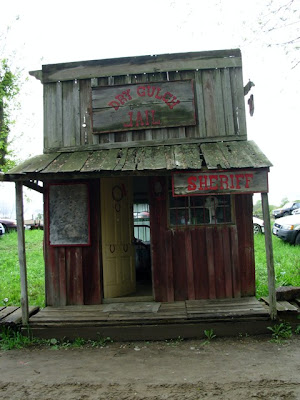 HWSRN sez the pitchers make it look a whole lot purtier than it really wuz, but it had been raining all day and the pathways were a sea of mud. It's probably much nicer when the weather's good.
Too, bad, sez HWSRN, but there's no photo of the Saloon. Which is where all the bands were playing. There was a big tent set up outside, but the bad weather had forced everyone into the smaller venue. The Saloon, however, was comfortable in its own primitive way, and the saloonistas were rockin'. 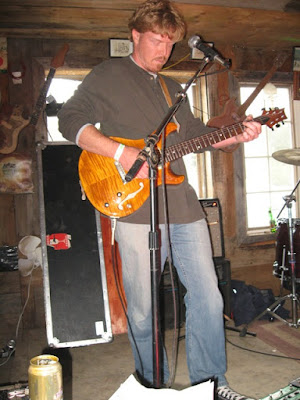 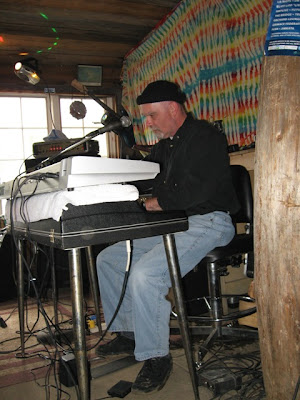 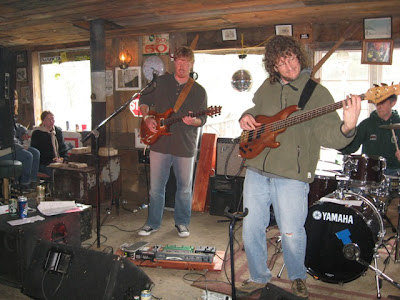 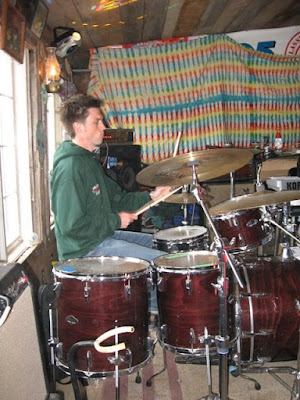 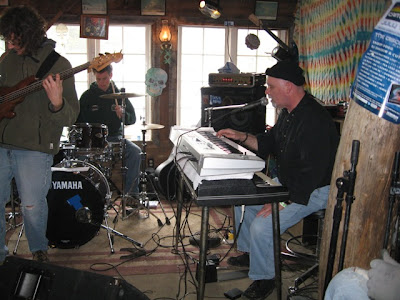 You can find out more about Chris Mulligan Band and hear some recently-recorded clips at Chris' MySpace page.

A peaceful oasis of compassion at the Duc Quang Vietnamese Buddhist Centre on busy Hamilton Rd. in London, Ontariario. It seems to me, somehow, that not so long ago, this was a Spanish Catholic church or something like that, and the statue in the courtyard was the Virgin Mary. Plus ça change, eh? 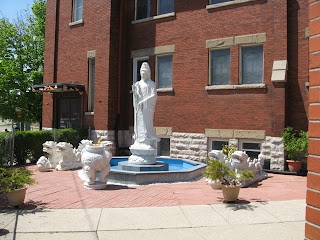 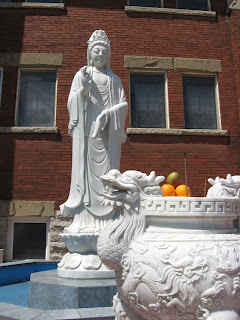 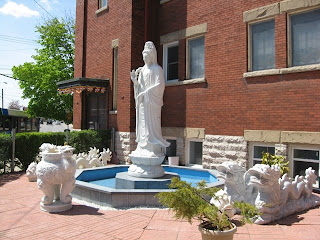 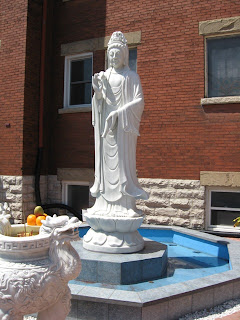 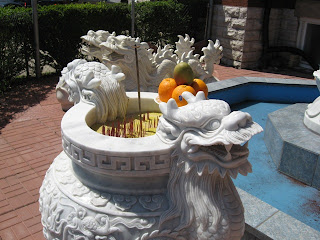 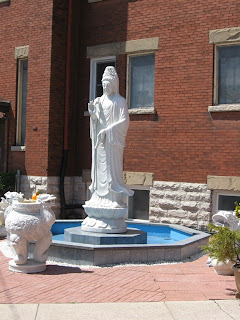 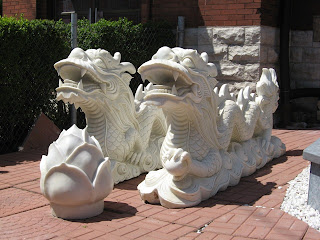 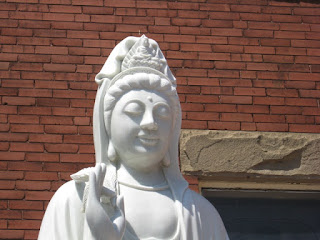 Tibetan calligraphy. Tough to do. Well, maybe not so tough, but you need proper instruments to really do it write. I've practised a little bit but all my calligraphy comes out looking like doodles. I'd like to learn to do it better. It's hard to do effective visualizations during meditation of syllables like this Hum. I imagine it would be easier if I knew how to draw it. Easier to recognize, easier to distinguish from other syllables, easier to remember.

Jayarava is pretty good. Check out his stuff here: http://www.flickr.com/photos/jayarava/

How On Earth Did I Miss This?

Albert Hofmann, the Father of LSD, Dies at 102

I learned Hoffman's story as a teenager. Let's just say I was interested in the subject. As I remember the story, he was riding home on his bicycle when he began to experience the effects of the drug. Like the front wheel got really big!

And then the back wheel got really small!

And then the Cheshire cat asked him what time it was because it very late!

And then Hoffman said something like, "I don't have time for this nonsense. I'm going home for schnitzel." Which he did.

And then he listened to Ravel's Bolero on the Victrola over and over and over until he solved the riddle of the universe which he feverishly scribbled on a prescription pad. After which he dropped off to sleep, and when he woke up he checked the pad.

Email ThisBlogThis!Share to TwitterShare to FacebookShare to Pinterest
Labels: Blinded by Science, Drugs in Me Pocket
Newer Posts Older Posts Home
Subscribe to: Posts (Atom)
Help! I've written and I can't get up!