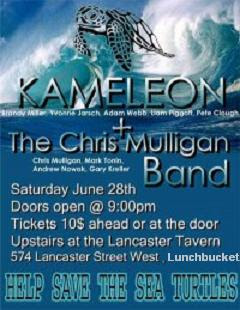 Singing Songs for the Turtles

Tickets are 10$ purchased ahead or at the door - 100% of proceeds goes towards sponsorship.

Please come out and help sponsor my volunteer abroad trip to save the turtles!
(I don't know this woman's name. HWSRN doesn't either. She's a friend of Mark Tonin's and the band agreed to play for her benefit. She has volunteered to go to Costa Rica to help save the turtles. Please, will no one think of the turtles?

Please invite all of your friends!!! Everyone is more than welcome!

Lunchbucket ON aka "The Tower of Song" 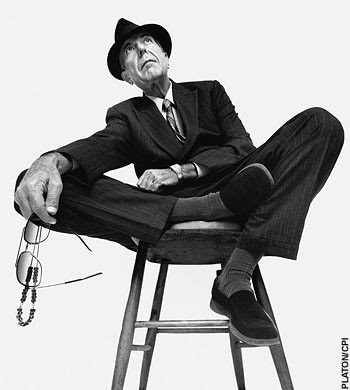 Leonard Cohen came to Lunchbucket last night and played the Square Peg in the Centre of the Hole, looking almost exactly like this photo here. Despite its unfortunate name, the Square Peg is one of the best concert halls in Canaduh.

Miracle of miracles, I got to go. A day pass for the evening because, as I said to Nurse Ratchet while abasing myself and grovelling, "C'mon Nurse Ratchet! After all, he is a pote! He's Canaduh's natural national pote now that Irving Layton's gone."

Nurse Ratchet sniffed and said, "Larry he is a po-ette, not a pote. When are you going to surrender your shiftless rebelliousness and stop trying to rearrange the language according to your own arcane little rules?"

"There's nothing ette about Leonard Cohen", sez I, "And I'll surrender when they erect a monument to Ogden Nash in Timeless Square! Meanwhile, kin I go see Leonard Coe, kin I huh, kin I please, pretty please?"

And so she let me. And Suzy Homemaker too, as a sort of chaperone.

Really, it's no con to say Leonard Cohen is a pote. He's a real life, legit, musical pote. And he's a Canajun national treasure...one whom many Canajuns don't even really know. More's the pity.

But the audience last night was positively adulatory. They gave him a standing ovation before he even started! And then he started with The Future. And just went on from there into the past, the present, the non-existent, the fantastic, the revelatory, the self-deprecatory, the whole story.

I'm not sure quite how old he is, about 75. After the third song or so, he commented how he hadn't been on that stage for 15 years, back when he was just a kid with a crazy dream. He was clearly enjoying performing, but one can't help but wonder if he'd just as soon be home in his drawing room petting his partner. Because really, the only reason he's on tour...the only reason we get the pleasure of seeing him perform a 3 hour tour of his music, is because he needs the money. And that's a whole other story of not "Taking Care of Business" I guess and getting screwed because of it. Trusting someone too much, or not really caring about what might happen. And if it was the latter, then that was his secret, unconscious plan to end up back on the road playing to thousands of adoring fans.

The band was fabulous, of course. Naturally, because of HWSRN, I have an affinity for the keyboard player of any band. Cohen's keyboard player was Neil Larsen, an absolute master of the Hammond B3, and a name I recognized immediately, tho I can't say who he's played with. However, he has a sound-patch for the old Yamaha DX7 synth named after him.

Cohen rolled out all the hits. He started off his second set with Tower of Song which, for me anyway, is nothing short of sublime and contains what I think may be his most famous line: "I was born with the gift of a golden voice..." Pure irony, of course, but he actually does sing pretty well, although not always on pitch. He has a poet's sense of timing too...knows just when to be a little off-beat from the backup singers. At the end of the song, the back-up singers sing, "Doo dum dum dum de doo dum dum." When it was over, Cohen said that he had studied the spiritual masters looking for the key to life. And that was the answer. Doo dum dum dum de doo dum dum.

All night long, the songs, the lines, seemed to be making reference to his current situation...the financial one, I mean, and the necessity of touring. But also to his past. He made jokes about his spiritual quest, his drinking, his loves and losses. He even dedicated a song to Bo Diddley...the most un-Bo song he has, Take This Waltz. And the audience lapped it up.

Then the show was over. But the master showman (who barely has to even move to get a reaction) kept coming back for more. Giving more. Encore after encore. The people loved it. Even tho it was clearly planned that way. For one encore they barely went off stage and meanwhile the stage crew were bringing out Leonard's guitar and rearranging things. Obviously he was coming back. There were, maybe, two people who got bored.

Not me. If I could write one song as well-crafted as Hallelujah, I'd die a happy wayward pote.