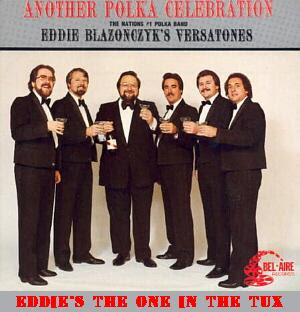 Today is International Women's Day, so in celebration of that I've chosen the chorus from a song by Eddie Blazonczyk & the Versatones, America's #1 Polka Band and a past Grammy winner:

OK, OK, I see the women gathering outside the door with torches, pikes & staffs (staves?)...I think I even see a short rope somewhere there in the petticoats.

Please, the inclusion of this excerpt is...satirical...or ironic...or abashed...pick one. The thing is, it's hard to tell whether Eddie & the Boys are serious or not. I don't know when this song was first released. I think it's from the era of Yellow Polka Dot Bikini, or maybe a little later...anyway, long before there was an International Women's Day, or political correctness, or any concept of intelligent life among the members of the female persuasion, apparently.

Now I like polka music. Not as much as HWSRN who, after all, plays the accordion fer godsake, in a polka band. He's the one who brings me this stuff. He barges into my cell with his latest vinyl discovery and hollers over his big puffy headphones, "Hey Larry! Hey Larry! Hey Larry! Ya gotta hear this!"

And I dutifully listen, because I can't afford to cause a disturbance on the range, or Nurse Ratchet will sedate me and force me to listen to New Age drones until I agree to give her a pedicure...which I wouldn't mind so much except she has six toes on her left foot, one of which speaks in tongues.

But where was I? Oh yes, I do like polka music. But it suffers from one flaw. Its subject matter tends to be a little antedeluvian. They say Polka People Are Happy People. And it's true. Polka music is happy, bouncy music. (Literally bouncy, if you closely observe the Polish women...) But that limits the thematic range of the lyrics. They tend to be about beer, women, dancing and...polka music.

Can you imagine trying to write a polka protest song? I can't, but HWSRN can becuz he's tried. Anyway, polkas tend to be happy. Waltzes, on the other hand veer towards corn syrup. Many of the Polish waltzes are about yo' mama. Only obereks seem to have the potential for social commentary because, even tho they're in three-four time like a waltz, they have more drive and more energy.

I believe Eddie's retired now. The gout got him and his son took over the band. I don't know whether they were/are the #1 band, but they certainly were one of the best in all of the USA. But even so, you see the unfortunate results above. It's sort of in the polka blood. That's one of the more egregious examples, but others a little less sore thumbish are plentiful.

So my suggestion for women on International Women's Day is to forget about feminism, glass ceilings, wage equality and all that stuff. Concentrate on polka music and how to transform it into a powerful tool of gender equality. Bonne chance!