Click on the screen shot to go to the actual page, but do it soon cuz I don't know how long it will be in place. Tibet is the featured country of the week. 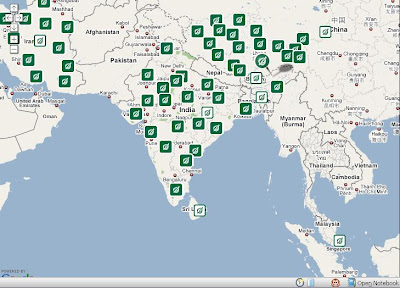 Posted by Larry Keiler at 2:37 PM No comments:

Parental Advisory: Since you can't see my eyes rolling, be advised that the title above is ironic/sarcastic/not serious, eh? They say that sarcasm is a form of anger. Maybe it's passive-aggressive. So, OK, I have some issues. But I'm still mystified by the Chinese government's inability to see the disconnect between their accusations and the whole of the Dalai Lama's career since leaving Tibet.

Having said that, here's a transcript of part of Democracy Now's broadcast from April 15/08. His Holiness is in Seattle giving teachings and generally being a nuisance I guess, but he took some time to subvert the minds of 15,000 young Murricans. Here's what some of them had to say:

AMY GOODMAN: We wrap up today show with the reflections of three kids from Seattle, Washington, who heard the Dalai Lama speak yesterday. The Tibetan spiritual leader addressed over 15,000 children at the Key Arena in Seattle.

AMY GOODMAN: And how old are you, Phil?

AMY GOODMAN: And who were you just watching?

AMY GOODMAN: And what does he mean to you?

PHIL: He means the future, because he represents hope. And we also—a lot of people at our school, we love to see someone who can set a good example. And because he—even though he’s a leader of Tibet and he’s exiled, he still does good throughout the world. I think that really means a lot. And I really hope that one day everyone will see as he does, that we need to have compassion, and we need to have hope.

AMY GOODMAN: And what school do you go to?

AMY GOODMAN: And how old are you?

AMY GOODMAN: And what did you think?

ELEANOR: Well, I think that it’s a great opportunity for all of us to be able to see someone who speaks with such wisdom and experience. And I’m really glad that I was able to learn from his powerful words.

AMY GOODMAN: What did you learn?

ELEANOR: I learned that there is such thing as a place where everyone can be happy and help each other. And he is a motivation to create that world.

AMY GOODMAN: Where is that world?

AMY GOODMAN: And what’s your name?

SHAY: My name is Shay.

AMY GOODMAN: How old are you?

AMY GOODMAN: Where do you go to school?

AMY GOODMAN: And what did you think of the Dalai Lama today?

SHAY: I think he’s very wise, and I think he had a message that everyone should hear, and everyone could be compassionate no matter what religion you are, or you’re atheist or whatever. And I think it was a great opportunity for us to see him.

AMY GOODMAN: Will you remember this day?

SHAY: Yeah, I definitely will.

AMY GOODMAN: Kids at the Key Arena yesterday. It was packed with children, ages three and four up through high school. But this in theSeattle Times: on Monday, when the Dalai Lama awarded an honorary degree at the UW, University of Washington, students will get to ask him his views on compassion, peace and relationships, but not on the Chinese political situation or Tibet. UW officials last month asked students to submit possible questions for the Dalai Lama’s campus visit. About sixty students responded, including eight who wanted to ask about China or Tibet, but when UW officials handpicked fourteen students to ask questions at the event, politics were deliberately left out.

It says here the Dalai Lama was awarded an honourary degree. We wonders, yes we does, what sort of degree...political science maybe?

And BTW, check out Democracy Now whenever you get a chance. You can download free transcripts of the shows, or podcasts, even video. They have excellent coverage of many issues that concern Murricans and other citizens of the world, but be warned. Democracy Now is unremittingly leftist/liberal/progressive, and the show would probably scoff at the idea of a demon-hearted Dalai Lama.

Posted by Larry Keiler at 1:02 AM No comments:

How Many Photos Are "Enough"? 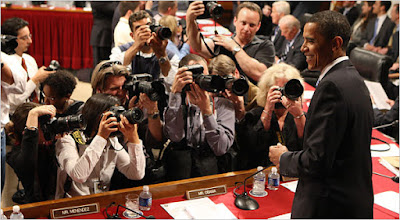 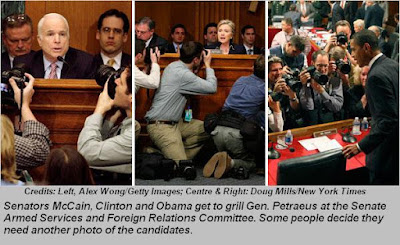 Posted by Larry Keiler at 9:45 PM No comments:

Email ThisBlogThis!Share to TwitterShare to FacebookShare to Pinterest
Labels: Iraq, Mass Kultur, Photos, US, US Culture, US Politics, War on Terra 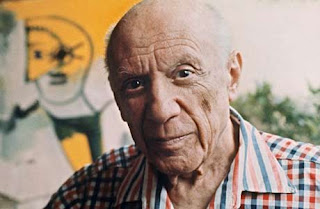 Today is the anniversary of Pablo Picasso's death in 1973.

I don't know exactly what to say about Picasso. Over the years I've spent a lot of time with him. Reading. Going to exhibitions. Looking at pictures. Looking at paintings.

There was no one quite as versatile as Picasso in the 20th century. He was creative and proficient in virtually every medium. He was unbelievably prolific. He was phenomenally successful in financial terms.

He was a little nuts, I think.

He was a Communist when Communists really toed the Party line. But he neve 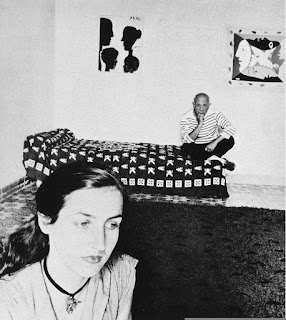 r did. How he got away with it is a testimony to his power and his individuality.

He was cruel and selfish. He was rude. He was acquisitive, yet sometimes quite generous.

He was cruel to his women. Look at this photo of him and Françoise Gilot, the only woman who ever actually left him and moved on. (She later married Jonas Salk.) What's he thinking? What kind of flower is this woman, really? How can I turn her into art? Too bad he couldn't turn his relationships into art, or more specifically, make an art form out of relationships. 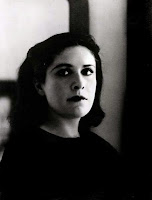 People loved him. Or hated

him. Or were obsessed with him. In later years, his ex-wife Olga followed him around and harassed him. Dora Maar never really got over him. Marie-Thérèse killed herself after Picasso died.

He loved the bull-fights. He admired the matadors.

He was a terrible poet. But he was a helluva painter.

Here's one of my favourite Picassos: 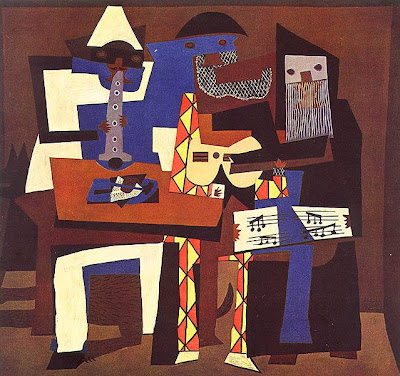 One day not too long after posting the Serendipity post, the phrase "I was just joshing" popped into my head. It's only natural that such idle phrases should scurry into my mostly empty cranium. After all, what else is there to do while pacing the sanitized halls of the Yoni School?

"Just joshing", thought I. "I'll bet that phrase is a reference to Josh Billings.!" So today I had another idle minute and searched briefly. Here's what I found:

: "JOSH - The best guess is that the Americanism 'josh,' for 'to kid' or 'fool around,' is a merging of 'joke' and 'bosh.' The pseudonym of an American writer may have something to do with the word, though. Henry Wheeler Shaw (1818-85) wrote his deliberately misspelled crackerbox philosophy under the pen name Josh Billings. Employing dialect, ridiculous spellings, deformed grammar, monstrous logic, puns, malapropisms, and anticlimax, he became one of the most popular literary comedians of his time. The expression 'to josh' was used about 18 years before Josh Billings began writing in 1863, but his salty aphorisms probably strengthened its meaning and gave the term wider currency." From "Encyclopedia of Word and Phrase Origins" by Robert Hendrickson (Fact on File, New York, 1997)

The OED concurs, suggesting that he chose the pseudonym from the existing slang word and his popularity promoted its usage. Anybody have a clue why so many 19th century writers wrote under pen names? There are lots of 18th and 20th c. pen names, sure, but it really seems to have flourished in the 19th. I haven't a clue.

So there it is. Maybe. Maybe not. Possibly. Maybe.

The site I found this on, by the way, is very useful if you're looking for the origins of phrases.

Email ThisBlogThis!Share to TwitterShare to FacebookShare to Pinterest
Labels: US Culture, Werds 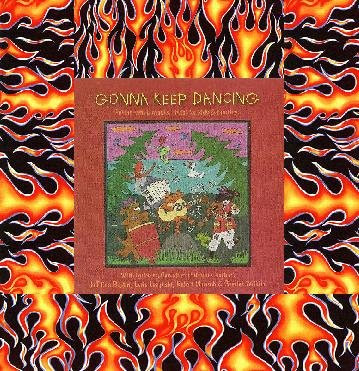 I'm sorry to report that "Gonna Keep Dancing" did not win the Juno Award last night. Sadly, for Eddie, the award was won by:

There has been no word from Eddie directly yet, but my guess is he's still recovering from the Juno parties. Even if you don't win, there's lots of fun to be had. And I expect also that he's not completely disappointed. He was astonished to receive the nomination in the first place. Congratulations to Ms. Gould, and to Eddie: Make another one!

Meanwhile, you can encourage Eddie by going to his site and buying his CD so he can pay for the next one!

For a listing of other winners, you can go to the Juno site.