Is Al Gore in Favour of the Draft? 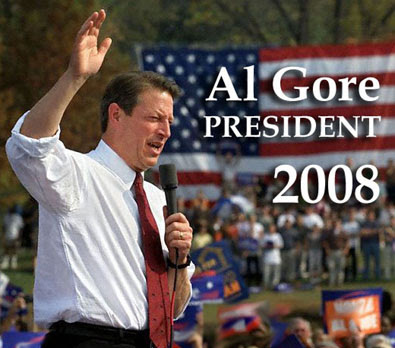 I can't remember whether I wrote about this before. Maybe I did. But there's a strong movement going on among US Democrats to draft Al Gore. He's riding pretty high since the release of An Inconvenient Truth. That movie is nominated for an Oscar. And Gore himself has been nominated for the Nobel Peace Prize! (I'm not quite sure how an environmental campaign qualifies as contributing to world peace, at least not in the specific sense, but there you go.)

The Democrats For Gore have an online petition, presumably to convince Gore that there's lots of support out there, just waiting for him to commit. I think you have to be Murrican to sign it, though.

It's not just the Yanks who are now slobbering over Gore. (In fact, the Yanks may not be slobbering over him at all...that remains to be seen...) It just so happens that Gore is doing his Inconvenient Truth slide show at the University of Hawgtown tonight. I heard that tickets (at $20 per) sold out within minutes and as of earlier today, scalpers were asking $400! Oh, if only those were campaign contributions!

I'm tellin' ya, somethin's gonna happen yet! Clinton and Obama watch out! Gore may just sneak up the middle.

Meanwhile, in a matter only tangentially related, today is the anniversary of the assassination of Malcolm X in 1965. (And, ironically enough, of the publication of The Communist Manifesto in 1848.) The Mothercorp radio program The Current today interviewed Austin Clarke, the Barbados-born Canadian novelist and winner of the Giller Prize in 2002. Clarke actually interviewed Malcolm X in 1963 for the Mothercorp, and then spent a day with him just a few months before he was killed. He had some interesting things to say about that period of Murrican history, about Harlem in those days, and about Malcolm's career as a civil rights leader.

Eventually, though, the interview with Clarke moved around to developments in the US election race...Hillary Clinton and Barack Obama. It was here that he made a most astonishing statement: that he would not be surprised if Obama were assassinated!

He said this quite straightforwardly, without much preamble. It was stunning...and it went by so quickly it could easily have been missed.

But what a thing to say! Here the US is poised, potentially, at a supremely historic moment: the possibility of electing either a woman as president for the first time, or a black man for the first time. That the possibility even arises is a profound statement about the evolution of Murrican society. But Clarke is suggesting that the US is not quite ready for such radical choices, that atavistic tendencies will resurface, and that by default one of these choices will have to be eliminated (with extreme prejudice, as they say.) What a statement to make on the anniversary of an historic assassination, one of a series in an era of disastrous political killings.

Email ThisBlogThis!Share to TwitterShare to FacebookShare to Pinterest
Labels: Literature, US, US Culture, US Politics