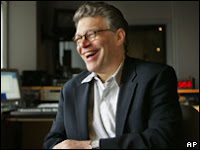 Oh m'Gawd, the Murricans have created another Franken Stein. The BBC is reporting that Al Franken, formerly of Saturday Night Live, author of Lies and the Lying Liars Who Tell Them, and currently (until today) hosting his own left-leaning radio show, has announced that he will run for the US Senate in Minnesota.

My first question is this: Why am I reading this on BBC? You'd think that would be at the top of some Murrican press feed...AP? Reuters? Fox? Ok, not Fox.

My second question is this: What next? Or in current blog shorthand, WTF? A comedian in the Senate?

Well, why not? Don't forget the actor who was Governor of California. What was his name again? Schwarzenegger? Oh, you mean Reagan! Right, see what I mean? The actor who would be President of These Yer Yoonited States. Reagan. Schwarzenegger. (Except Arnold can't be, but would be if he could.)

Then there's the lying liar and his lying lies currently ovalling the office. Or, as Michael Moore puts it, "Hey! Where's my country, dude?"

The US has had a peanut farmer. A slave-owner. A vacuum cleaner salesman. What's so strange about a comedian in the Senate? Especially since he's a bit off-centre. I mean left-of-centre. (All us godless liberals ((read: closet commies)) gotta cheer for the lefty comedian, even tho in the photo above he's right of centre.

And Minnesota...well! Let us not forget that it was Minnesota that elected Jesse Ventura governor! And then gave him the highest approval rating of any Minnesota governor in history. (All I can say about Ventura, since I don't know any better and can't keep my mouth shut, is: As a governor he made one helluva wrestler.) My favourite story about Jesse Ventura is that when he had a private meeting with the Dalai Lama, he made sure he asked him what his favourite movie was.

Truth to tell, politics could use more comedians. Imagine Franken, Jon Stewart, George Carlin, Chris Rock and Bill Maher all in the Senate. Imagine Dick Gregory and Lenny Bruce in the Senate! Now that would make C-Span worth watching!

Email ThisBlogThis!Share to TwitterShare to FacebookShare to Pinterest
Labels: US Culture, US Politics