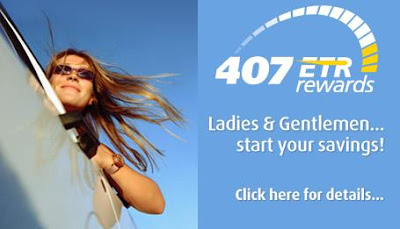 The 407 ETR is the infamous toll highway of Ontariario, built by the NDP (aka National Deficit Party)(aka Nearly Democratic Party)(aka Normally Defeated Party) guvment in the 1990s. ETR stands for Electronic Toll Road. When it was first opened they touted their electronic tolling system which uses a transponder (and if you don't have one of those they take a picture of your license plate and send you a bill.) The system caused quite a few billing problems in the early days, and still does today sometimes. But it's better than it used to be.

Revenue from the highway used to go to the province. But after the Newly Defeated Party gave up the ghost and bowed out in favour of Mike Harass and his Neo-Constipators, the highway was sold to a private consortium in a deal that caused consternation among many citizens because it was so sweet for the consortium. In other words, the 407 ETR is a private highway now. That explains, maybe, in part, why the billing system has improved a little. But there are still problems (you can hear them periodically on talk radio) and the company has a reputation for arrogance and unresponsiveness.

Ontariario's latest guvment, run by Gliberals, has had clashes with the 407 ETR company as complaints have continued to come in and tolls have increased steadily. (This goes to show why public highways, as essential services, ought not to be controlled privately...it makes me think of toll collectors on medieval bridges: Thou shalt not pass! Unless you pass some cash!) But for the past year and a half, the company has been constructing extra lanes on parts of the highway, which has improved traffic flow (and revenue too, one would think.)

Anyway, 407 ETR must have been taking some PR lessons, plus I think they made a deal with the Ontariario guvment, because a couple of weeks ago, with great fanfare they introduced their ETR rewards program.

It's a complicated piece of business. And really not much of a reward. Have a look below:

ETR Rewards is our way of thanking you for choosing to use Highway 407 ETR.

Using 407 ETR is a great way to skip ahead of congestion and get home faster. Now, it will also earn you great rewards!

And, unlike other rewards programs, there is no membership fee or sign-up process.

We will contact you by mail when eligible for ETR Rewards. The letter will outline:

In addition, your monthly 407 ETR bill will highlight your total savings on tolls and remaining free kilometres.

To be eligible for ETR Rewards, you must:

There are four tiers in the program, which are based on the average number of transponder kilometres driven on 407 ETR. Each tier offers a set amount of free weekend kilometres and savings on gasoline purchases.

Drive more, save more! Accounts will be assessed every six months to determine if they qualify for the program and if so, for which tier. The Program phases extend from February to July 2007, and August 2007 to January 2008. At the end of each period, customers will be advised of their tier status for the next period of the program.

Drive more, save more! Four tiers. Transponder kilometres. Assessment every six months. Free weekend kilometres. (Lovely, since most people use the 407 during the week. It's called commuting!) Excuse me while I call my accountant to figure this out for me.

I do admit that the Gas Rewards is legit -- 3 cents off per litre -- but the number of litres you're eligible for is also determined by how many kilometres you've driven.

OK. It's all good. 407 got good press. HWSRN, who uses the highway regularly got his wish. He always said he wanted the 407 to give the regular customers a bonus. They're the ones paying the shareholders' dividends, after all. He got his notice of bonus. He got his Gas Rewards card. He registered. He signed up. He got 3 cents off. So he was pleased. For a second.

Last week his bill came in the mail. At the top of the bill, it says this:

Effective February 1, 2007, new toll rates and fees will apply.
How can you not be happy? We all get our reward...in the end.

How come no one else is complaining?
Unless the issues have been resolved which are not, than what is the hold up for the ones who are suffering?

I think people are tired and have lost the hope but by proper communication we should be able to mobilize these victims to speak up against this modern day robbery.

Well you Obviously Have a grudge with the NDP party, One fact is the 407 was intended to return to a free way after 8 years of tolls. The conservative government took over and in order to perform some simple accounting tricks to balance the books so that they looked good. Harris and his party sold off the hwy as you stated. Its leased for a 99 year term with many flaws in the contract. Had the conservatives followed the NDP plan the 407 would be a freeway today. There are plans for the 407 to extend from Pickering to the 115. the people hired to design and build it will be awarded a 30 year lease. I hope that the Government tighten the contracts better so fees are controlled and the new company is unable to sell off any interest off to a third party.

Thanks for your thoughtful comment Tim in the GTA. It sure beats the spam I mostly get these days.

I'd like to tell you though, that I don't have a grudge against the NDP or any other party in particular (except maybe the Mike Harrass Neo-Constipators and the Paul Martinette Gliberals and the Malton McGuilty Gliberals and the Brian Muldooney Neo-Constipators...)If you look through other politically oriented posts in this blog, you'll see that no party escapes the sting of my sarcasm, and every party and many politicians receive fanciful names cuz that's just what I do.)

Your analysis of the the 407 business is quite right. Mike Harass and his goon squad did us no favours there, and Malton McGuilty and his Minister of Transmutation at the time (I forget his name...) did nothing but make blustering noises (as usual) to make us all think they had some effective plan of action.