The Hawgtown Mop & Pail* is reporting that our "new" Constipated government wants to extend two controversial anti-terrorist measures that were passed by the former Gliberal government after 9/11.

One, called preventative arrest, lets police detain terrorism suspects without warrants. The second, called investigative hearings, allows police to force individuals who may know about a terrorist plot to share their information in a closed-door court.

But all for naught, really. It's been shown repeatedly that extraordinary security, detention and arrest measures are not what gets the job done. In fact, the two measures under consideration have never been used. What is effective is standard, meticulous, determined police work. All the recent arrests, in Toronto, London, the US have come about in this way. Thus, the extraordinary measures are exposed as gratuitous, fear-driven assaults on civil liberties. Besides, it isn't as if we don't already have draconian techniques, such as security certificates, under which citizens can be deprived of all their civil rights without even knowing why.

“People were arrested who allegedly were planning to blow up this building, to behead the Prime Minister and to destroy people in the Toronto area.”

Mr. [Br]ay, who is responsible for Canada's national-security agencies and the Royal Canadian Mounted Police, cited the example even though police arrested the 18 Toronto men last June without using those sections of the anti-terrorism laws.

Opposition parties (even the Gliberals who introduced the measures) are opposing their extension. Which proves that the insistence on a review process when they were first passed was actually a good idea. Measures like these are more likely to produce another Maher Arar than a bona fide bomb-toting terrorist.

***
*Footnote: I am forever indebted to Richard J. Needham, the former columnist who, in fact, coined the name Mop & Pail and indirectly gave me permission through books such as Needham's Inferno to comment satirically on the foibles of Canajun society and to mess around with the names of people and institutions. He helped to set me on the path of teenage speling rebeling and probably is partly responsible for my current incarceration in the Yoni School for Wayward Poets. 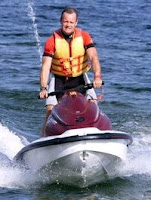 Oh man ya can get bobby bacon just sizzling in the old frying pan.

Keep the environment in the headlines and slip in some sleezy cheezy fear mongering legislation.