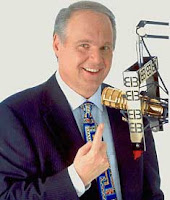 Oh what a treat I had today! On Super Tuesday, of all days, I got to listen to pretty much all of Lush Bumraugh's radio show. I guess maybe it's not news to the Murricans, but it was a bit surprising to me that Lush is frushtrated these days. Things are not going hish way. In fact, I think Lush Bumraugh thinks the Republicans are heading firmly down the flusher.

It's a sign of trouble when the leading so-called "conservative" radio talk-show host in North America spends almost his entire three hours fulminating against the man who is apparently the leading Republican runner, Sen. John McCain. (Ah, we here in Canaduh have it so much nicer, where McCain refers to a brand of French fry from PEI...) Bumraugh never actually said so, but he clearly prefers Mutt Romney to McCain. He accuses McCain of Liberal Democratic leanings. Which is disastrous for Republicans, since the Democrats are supposed to be the ones who have Liberal Democratic leanings. But there you have it. On Super Tuesday, Lush Bumraugh spent three hours attacking (or at least disparaging) a Republican! He barely mentioned the two leading Democratic candidates. (So, maybe the Republicans are sensing defeat, and have already taken to squabbling among themselves?)

Now, to me this spells trouble for the Republicans. Either that, or it's just that Lush is, at the moment, concentrating his efforts on convincing registered Republicans to vote for the Republican candidate he prefers. When that's all done, one way or the other, perhaps he'll turn his attention to the Democrats.

I love listening to Lush Bumraugh. Not because I agree with him. But he's a masterful broadcaster. He's bombastic. He's abrupt. He's loud. He's intimate.

Yes. Intimate. He hunkers down to the golden microphone in the EIB studio and can sometimes modulate that gruff voice into the warmest teddy bear you could ever want. And he talks to his friends. All those tortured conservatives who have nowhere else to turn -- 20 million of them or so -- and need good ole Lush Bumraugh to validate their opinions and make them not feel so lonely. Why, to hear him talk, you'd think that the USofA had not been ruled by a Republican president for the last 7+ years! You'd think the Democrats were in the White House. You'd think the Murrican mainstream media had never once abdicated its duty of responsible journalism, its duty of speaking truth to authority. You'd think Fox didn't exist! And people like Sean Hannity and Bill O'Reilly (two certifiable bigots IMHO...).

Lush Bumraugh is a great improviser. If he went seriously into improv comedy, rather than playing at it the way he does, I'm sure he could get himself a star on the Hollywood Walk of Fame in no time. He's a marvelous talker and the pearls of wisdom slip easily off his honeyed tongue. I'm sure he goes into the show with a few ideas about what he wants to talk about, but he's not like other talk show hosts I listen to. They organize themselves into time slots and topics. "OK, this topic here, then the break, then that topic there." He takes a few phone calls from all across the country and charms everybody he hasn't already ravaged. He flows from one subject to the next in an uninterrupted stream of conservative consciousness.

Lush Bumraugh is all politics all the time. Why, he even managed to turn an ad for a tankless water heater into a political screed! Marvellous stuff. And he's also all editorial all the time. I don't think I know of anybody else who can spend that much time offering little but his own opinions. Remarkable, I say.

So I like Lush. Bumraugh. I'm not sure I could listen to 3 hours of him every day. But every once in a while it's a real treat to hear him, and to hear how the persecuted minority (conservative Republicans...) is managing to survive in such a hostile world.

Email ThisBlogThis!Share to TwitterShare to FacebookShare to Pinterest
Labels: US, US Politics