Caledonia, Caledonia, What Makes Your Big Head So Hard? 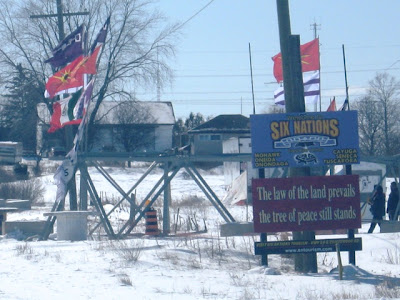 Today is the second anniversary of the Six Nations native occupation of the Douglas Creek Estates in Caledonia, in good old Ontariario.

I haven't written about it previously. The world is full of occupations and disputes and land claims. Many of them bigger and more momentous. Israel, Palestine and Gaza. That's one big land claim isn't it?

But Caledonia is closer to home.

On Feb. 28/06, the members of the Six Nations took over a land development site called Douglas Creek Estates, on which building had already taken place, saying it was native land and it belonged to them. They blockaded the road, which was in fact, the main street of Caledonia and took over. The blockade caused major disruptions in the town of Caledonia, gave rise to protests by the local residents, and in some cases incited destruction of property and minor violence. Especially during the first year of the occupation, there was a great deal of tension. This abated somewhat after the blockade was finally removed, but other developments since then have ensured that the crisis is not yet past.

That's a little bit of background. If you want more, Google Douglas Creek Estates - Caledonia ON and you'll find that a little industry has grown up around this occupation. 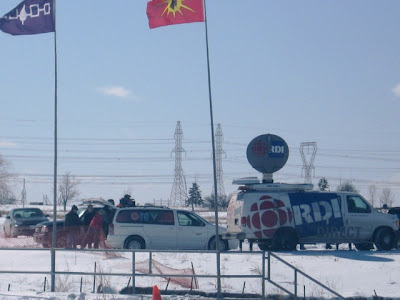 So now we are into year 3. HWSRN just happened to be in Caledonia today, the actual day of the anniversary. He took some photos (from a distance, without getting out of his vehicle, because it is not a place that is inviting to people taking photos, unless you are big mainstream media, and sometimes not even then.)

The Caledonia occupation brings into stark relief all the problems Canada has had in dealing with aboriginals, land claims, and the reserve system. Overlapping jurisdictions exacerbate the problem. 200 year old treaties raise their hoary heads. Mohawk Warriors slip in and out of the territory relatively unimpeded. It's a mess. And the local residents suffer the consequences but don't have any of the power.

Ultimately, the Six Nations are claiming (based on a treaty of 1784) a huge swath of southern Ontario, six miles on either side of the Grand River, for its whole length, which they say was never legally ceded to the government of Canada. It was taken from them over the years by government fiat or shady dealings, anything but an honest trade. 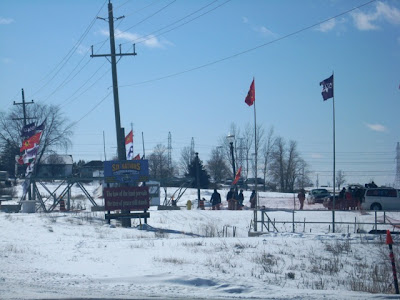 And here's where the difficulty begins. Jurisdictional troubles. The aboriginal question is a federal responsibility. And successive federal governments, of any party you'd like to name, have managed to drag their feet when it comes to dealing with land claims. They seem to hope it will all just go away if they ignore it or prolong the agony.

It's not going to go away. The First Nations have, if not the highest, one of the highest birth rates in the country. (And there's an interesting anthropological study...)

As a result, the state of land claims by aboriginal groups in Canada is a disaster. There have been some successes, but the looming claims far outnumber those.

Furthermore, any action by aboriginal groups inevitably takes place within some province's territory. So the provincial governments have to become involved. This occurs mainly in the area of policing. And in Ontariario, policing of sites like the Caledonia occupation has become a thorny problem, because a native, Dudley George, was killed by provincial police in 1995 at a similar dispute in Ipperwash Ontariario. The current premier of Ontariario, Malton McGuilty was instrumental in setting up the public inquiry that excoriated the previous government's actions at Ipperwash. So, when it comes to Caledonia, he's walking on eggshells. The result is a lot of football tossing. Back and forth. Back and forth.

Many Canajuns I have talked to just want the governments to do something! On the other hand, their opinions about the Six Nations claims are quite divided. Everybody seems to agree, more or less, on the justice of their claims. The natives have begun to develop the idea that they are stewards of the earth. I think this is possibly just another version of the Noble Savage myth, perpetrated by the "Noble Savages" themselves. But the protesters clearly broke laws and have never been called to account for that. The OPP (Ontariario Provincial Police) has repeatedly failed in its duty to enforce the law, and there is not a citizen in the province who doesn't think the reason for that is political manipulation. Malton McGuilty is guilty. And the continued inaction (or, at the least, failure to make visible progress) is made worse by the fact that the Six Nations groups themselves appear unable to produce a united leadership. 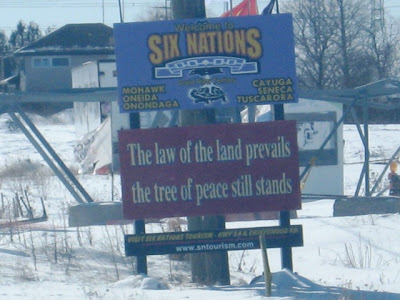 Oh, there's so much more to be said. But I have only one thing more right now. You know, India, Pakistan, most of Africa, parts of Asia...they're all still working through the consequences of colonialism, that virulent strain of thought which presumes that you can take over and actually own somebody else's land, their homeland, their culture. We see it all happening far away.

Caledonia proves that we're still dealing with the colonial past right here.

six nation, six nation it's your head that is HARD!!!

Gods land: always was, always will be!!Our's to use ONLY!!!

When man is gone: it will return to the rightfull owner: GOD!!!

For your information:Dudley George, was killed by provincial police in 1995
Dudley George was packing an AK-47!

Some time you get what you reap!!!

Well, Jim, I guess ignorance, anger and racism triumphs over the facts every time, eh?

I think you'll find that at the trial of Kenneth Deane, the judge (a white judge, mind you) ruled that Dudley George was unarmed. Look
here .

I think you'll find also that the report of the inquiry on Ipperwash states the same. On p.72 of the Executive Summary, the Hon. Sidney B. Linden, Commissioner (another white guy) states: "After carefully analyzing the evidence, I am confident that Dudley George did not have a gun on the night of Sept. 6. Ken Deane's assertion that Dudley threw his rifle on the ground is implausible." You can find that here: Ipperwash Inquiry

But I don't suppose you're really that interested, are you? It's much more fun to spread misinformation.