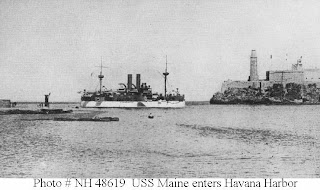 Today is the anniversary of the day the USS Maine exploded in Havana Harbour in 1898. According to the Naval Historical Center, more than 260 sailors were killed.

I wonder how many Murricans now know that "Remember the Maine!" became the rallying cry of the Murricans in the subsequent Spanish-Murrican war. As a Canajun, I wonder how many Canajuns ever knew that. I remember hearing the expression as a kid, but I suspect it wasn't until much later that I learned anything at all about what it meant.

And only today did I decide to research it a little bit. But somehow, some of the details were familiar.

The Maine was sent into Cuba during the Cuban independence struggle with Spain to protect Murrican citizens. This is a (sometimes) legitimate (and often-used) rationale for establishing a military presence in trouble spots around the world. In this case, the US was not engaged in open hostilities with the Spanish, and the Spanish government had reluctantly agreed to the ship's presence in the harbour. Everyone was wary and working to avoid trouble. 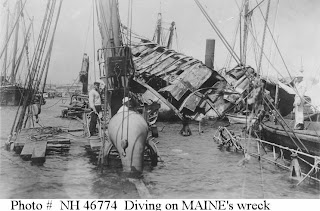 But then the Maine blew up. In the immediate aftermath, Spanish officials were instrumental in the rescue operations, which led the captain of the Maine to believe that Spain might not be responsible for this disaster. However, a US Navy board of inquiry ultimately came to the conclusion that the Maine had been the victim of a mine. The board, however, did not assign blame to anyone.

Nevertheless,this conclusion inflamed Murrican public opinion, aided and abetted by the "yellow" press, and it wasn't long before the tension escalated into outright war.

But in fact, even at that first board of inquiry there was some doubt about the conclusion that a mine was responsible for the explosion. Some said it was spontaneous combustion of a coal bunker right next to an explosives magazine that caused it. Later studies also raised this possibility, perhaps even more strongly, but there has never been a definitive conclusion.

Now, US history is liberally sprinkled with iffy examples of so-called provocation, the latest one being Iran's putative nuclear program. (I shouldn't pick on the Murricans about this sort of thing, though. World history is full of this. Any excuse to go to war, it seems...) And somehow or other, elements of the mainstream media always seem to be available to fan the flames of nationalist outrage. It seems the rabble-rousing press played a large role in instigating and supporting the Spanish-Murrican war.

The more things change, eh? And who played a pivotal role in garnering support for the current Iraq war? The media, of course. Rather than doing their real job, they bowed and scraped before their political masters and misled the Murrican people. Who are the "yellow" journalists of today? Fox News, maybe? Who never let the facts interfere with ideology? But they were not the only offenders. Nearly all of the big media joined in.

Was the destruction of the Maine a deliberate act of war by the Spanish? Was it a phony provocation? Or an accident? It's hard to say. I don't think the Spanish did it. The Spanish-Murrican war lasted four months and ended with the downfall of the Spanish empire and the possession by the US of nearly all of Spain's colonies, including Cuba, the Philippines, Guam, and Puerto Rico. It made Teddy Roosevelt famous. It set the course of history. Look at the names above. They are all still central to US policy. John Hay, who later became Secretary of State, called it "a splendid little war".

Alas, there is no such thing today as a splendid little war. Even the little wars, the six-week Mission Accomplished wars against relatively weak blow-hard regimes have a nasty habit of degenerating into interminable death traps. Fortunately, we still have the media to beat the jingo drums for us.

The maines gleaming white hull longer than a football field contrasted against the blackness of the sea and sky. the Maine was the largest ship ever to enter Havana harbor.It was a bursting, rending, and crashing roar of immense volume, largely metallic in character. It was followed by heavy, ominous metallic sounds.Then there was intense blackness and smoke. thank you
=====================
danica