Sum a Dem Call It Ganja

Proof that things can't be all bad in Afghanistan...
Click on the title to go to the original page. 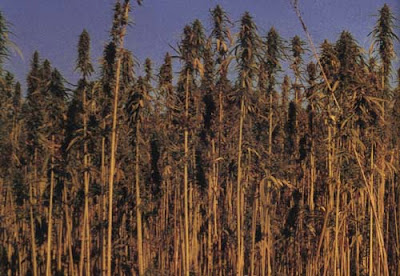 General Rick Hillier, chief of the Canadian defense staff, said Thursday that Taliban fighters were using the forests as cover. In response, the crew of at least one armored car had camouflaged their vehicle with marijuana.

"The challenge is that marijuana plants absorb energy, heat very readily. It's very difficult to penetrate with thermal devices. ... And as a result you really have to be careful that the Taliban don't dodge in and out of those marijuana forests," he said in a speech in Ottawa, Canada.

Even successful incineration had its drawbacks.

"A couple of brown plants on the edges of some of those [forests] did catch on fire. But a section of soldiers that was downwind from that had some ill effects and decided that was probably not the right course of action," Hiller said dryly.

One soldier told him later: "Sir, three years ago before I joined the army, I never thought I'd say 'That damn marijuana'."

Email ThisBlogThis!Share to TwitterShare to FacebookShare to Pinterest
Labels: Afghanistan, Canada, Drugs in Me Pocket, War on Terra

Hmmm it looks like ditchweed to me but how can one tell from a picture. it is amusing though.

But in this world these products such as opium, cocoa, and so called marijuana have legitmate industrial uses that can not only be very profitable but healthy for the environment.

Instead of chopping down old growth forests, marijuana, ditchweed and hemp can be used in the manufacturing of products such as paper, millwork. Rather than wooden doors in a building all doors could be made of hemp.

On season of ditchweed over a few acres could save a thousand trees that are over 50 years old.

We are so silly. We lack imagination and creativity. the people who wish to destroy good cash crops because it may have a miniscule amount of THC should spend a day smoking the stuff.

Concerned about the environemnt and Golbal warming? Then take a new look at some of these fast growth materials.

I figure we good replace are whole lumber industry with hemp. It is cheaper to harvest, it grows fast and it is healthier for the environment.

It is so freaking silly to chop down a tree that is 50 years old or more.

Heck I could build a whole subdivison of houses with the stuff in that picture.

Not that I have any strong opinions on the subject.

If U planted the stuff on 50% of the flat roofs in Toronto. You would reduce the city's temperature by 2 degrees C. A normal roof can heat up to over 50 degress c. A green roof of hemp, praire grass would maintain a temperature of about 21 degrees C.

The payback on a green roof in terms of savings on energy costs is between 3 and 15 years.

Yeah, but you'd need a good vapour barrier! Either that or a good stereo that plays Raindrops Keep Falling On My Head all day long.

And I agree, dem don't look like any marijuana plants I've known. But I'm no expert.

A musician buddy of mine once spent a summer with a partner cultivating a fairly large tract...somewhere...I don't know if it was in a farmer's field or on the edge of a woodsy area or what...the day they went to harvest it, they didn't find it. Or rather, they found it gone. Bummer.

In the bottom of some drawer I still have a copy of High Times. I like to look at the pictures.

Bong! (Is that the dinner bell?)

For a moment there, I was scared WHAT you were going to say you found in your drawer! (Didn't want the blog to get you arrested!)