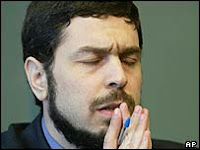 Talk radio! Yechh! Sometimes I think the dregs of the earth call into talk radio shows. Unfortunately, I've done it once or twice myself. Of course, I think the hosts should thank God they get the occasional intelligent commentator like me. But mostly, it's feeble-minded chatter, faulty logic, unfocused meandering, inability to stand up to an argument, ubridled envy and uncontrolled rage. And that's just the hosts! The callers are several rungs below that.

What brings this rant on? Maher Arar, that's what.

I begged the powers that be at the Yoni School to bring me a radio so that I might follow the proceedings in Ottawa as Prime Minister Harpie extended his heartfelt apology to Mr. Arar and his family for the unspeakable ordeal they've suffered. And they did! Wonders never cease. A radio appeared and I avidly flipped the dial for outside news.

Actually, the apology itself was a rather banal event, and afterwards Mr. Harpie took all manner of questions, some of them even related to the Arar affair. I'm not going to get into the details of that. What do I look like? A reporter? A journaliste? No! Suffice it to say that Mr. Arar will be paid $10.5M (Cdn) for his troubles, plus legal expenses. Go here for a factual report. Go there for another one. In fact, the most powerful moment of the day was the statement made by Arar's lawyer. Quite impassioned, it was.

After the Prime Minister's press conference, (and actually for a while before) I got to listen to call-in radio shows. And the big topic of conversation was this Maher event. Then there was Mr. Arar's press conference. Then there was more blather on the call-in shows. Now, I'm not big on outrage. Annoyance, yes. Righteous indignation, most certainly. But today, I am positively outraged. I never thought I would use this word seriously, because I find it comes to the lips of Canadians too easily, but I am appalled, utterly appalled, at the attitude that some of the callers took in regard to the settlement with Maher Arar. In the space of a few minutes, Maher Arar was transformed from a cause célèbre and Canada's most famous (recent) wrongfully accused into a greedy, suspect, overpaid, self-serving possible terrorist (torture victim...)

One man called in to 570News this morning and suggested that he would like the opportunity to be tortured if he was going to get $10M. ! I repeat: ! And the afternoon host, Gary Doyle, repeatedly mentioned that this apology from the government was politically beneficial for the Constipated Party and Canada's "New" Government. Then! Later on I heard callers to the afternoon drive show on CFRB. One man, a Canadian serviceman no less, insisted that Arar would not have been put on a watch list for no good reason. Indeed, that there was much more to this than we have been told (because the Murricans still don't trust Mr. Arar....! I repeat: !) and that some day we would all discover (presumably when Mr. Arar succeeds in blowing up the Parliament buildings) that we have been duped.

Talk radio typically overflows with vitriol, but really, this is too much. Bewildered and bedeviled, I ask myself, "What is with these people?" I put it down to several causes:
1. Envy. Pure envy. "How come I don't get ten million bucks?" these niggardly souls complain.
2. Laziness. Intellectual and emotional. Many of the callers didn't even possess the basic facts about Mr. Arar's case. Too lazy to find out. Too lazy to imagine what his life must have been like then, and now.
3. Faulty logic. Some people wanted to know why this one man should get so much money when there were so many other worthy causes crying for government aid. As if it were a zero-sum game. As if one worthy cause negates another.
4. Stupidity. Sad, but true. Some people are unrelievedly stupid.

Wake up, people! Maher Arar is, and was, INNOCENT! It's not a case of not guilty, or let go on a technicality. He was INNOCENT! From the very beginning. As determined by a two and a half year national commission headed up by a well-respected judge. His rights as a Canadian citizen were abused and his personal safety jeopardized by the calculated actions of a few individuals in authority. People who should have known better but were too absorbed in their own little high-security top-secret worlds to pay attention to something as abstract as inalienable rights. Canadians should not be quibbling over a few million dollars (out of a surplus of billions). On the contrary, Canadians should be expressing massive concern that our collective values of freedom, justice and respect could have been so easily subverted.

In effect, Maher Arar was abducted by the United States, aided and abetted by the Canadian government, his own government. And subjected to torture. For anyone to suggest that the amount is too much, let them think of what it might be like to be tortured for a year. Not just physically. Mentally and emotionally too. Now, I don't like to admit this, but I've been known to cook bacon now and then without a shirt on. You all know what happens when you cook bacon. Sputtering fat, that's what! And it hurts like hell to get just one little drop of hot bacon fat on my oh-so-sensitive belly. I have difficulty imagining what it must be like to be tortured every day, not knowing when the fat will hit the fan, not knowing whether you might live or die, not knowing if anyone at all cares...Anyone who thinks they might like to trade places with Mr. Arar, for any amount of money...well, they're clearly more than one brick short of a full load.

Far be it from me to praise Stephen Harpie, but he and his government did exactly the right thing. Whether it's politically expedient or not makes no difference. And it's not necessarily the easiest thing to do either, apologizing for someone else's behaviour when you had no control over it and it happened several years ago. Think how you would feel if you had to do that.

To tell the truth, I'm practically struck dumb by the idiocy of some of those people. It almost calls for yet another apology to Mr. Arar. If people want to be outraged, they should direct their attention to the people in authority, members of the RCMP and their overseers, who committed this most grievous error and in the end made it necessary for the government to apologize and spend 12 million dollars worth of taxpayer money to try and make it right.
Posted by Larry Keiler at 11:25 PM

Right on dude. I agree completely! I cannot believe some of the comments about this situation. Appalling ignorance.

Hey, above anonymous is not w.t.

No, that's somebody really anonymous.