Some Talk About Money

HWSRN gets the union newspaper. He belongs to the union. Musicians union. The American Federation of Musicians. AFM. Affiliated with the AFL-CIO. They let the Canadians in too.

The paper is called International Musician. That's so you know they let the Canadians in too. Canada has its own vice-president. He has a moustache.

I've got three articles here from the Jan/07 issue of International Musician. (They're a little tiny, but if you click on them you get a larger version.) The first one that caught my eye was this one: 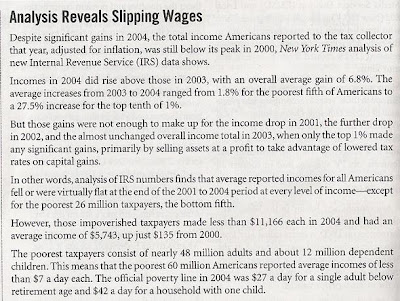 Check out that last paragraph. $7 a day! In the good old US of A! Does this not seem Third Worldish to you? Does it not conjure up images of shacks in the Ozarks and Dustbowl Okies? Can you not picture some wide-eyed little nappy-headed boy sitting in the corner of a dank verminous underground parking lot in the projects? Wondering whether he should spend that seven bucks on a Big Mac or smokes? And the population that's living on that is larger than Canada's whole body count!

I thank my lucky stars I'm not in that situation. But all I know is, I've been working harder (it seems) for about the same money for a couple of years now. And the same can not be said for the oil companies, to which I am such a generous contributor.

Just to the left of that article was this one: 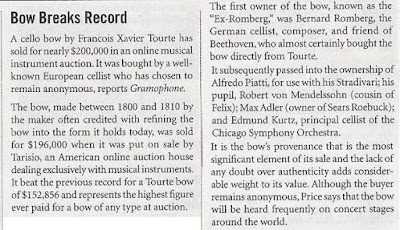 $200,000. That's a lotta money for horsehair. (Or whatever. I'm not too familiar with Cellos. I have more experience with Jello. Red is my favourite.) This goes to show that the world of classical music is still a big business with a lotta money floating around. And it also shows that branding holds sway even in the rare air of Symphonic Olympus. "It is the bow's provenance that is the most significant element of its sale..." not necessarily the qualities of its construction, or whether a modern-made bow might actually be better. (Everybody loves antiques.)

Finally, on the next page of the paper, to the right of the incomes article, was this: 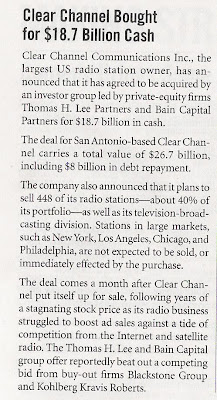 What do you think of a company that controls $18 billion worth of communications? If all those $7 per day people had access to the supposedly public airwaves, I wonder what they would say.

I suppose I'm commenting, eh? But I'm really just making an observation. In this union newspaper we can go from abject poverty to spending a coupla hundred grand on a cello bow to billions on ways to influence the minds of the masses. And it's all happening in one little corner of the universe called USA. (Of course, they let in the Canadians too.)

Oh, and here's another benefit of union membership...Clipart!

I would guess the musician bought the bow not so much for vanity, but for an edge in sound and performance (perceived or otherwise). Some people buy houses (well, $200,000 may buy a house today) while others buy such things as bows.

I can remember almost 25 years ago spending $6000 on a 64 K IBM computer - instead of spending it on a downpayment for a house... and believe me, that $6000 was about all BB and I had... some people thought that was a silly purchase... maybe it was... But for us it was the choice we made.

Does Larry belong to the WPU - the Wayward Poet's Union?

I also suspect that equivalent (or near-equivalent) monetary imbalances are happening in other corners of the globe, and not only the US, but it is so much fun to bash the US. That should be easy tomorrow after George W announces his plans for Iraq...

A very sad state of affairs created by the Texas/Haliburton corporate mafia.

Is it fiscal mismanagement or criminal fraud.

Hmm...Wayward Poet's Union, eh? No such thing (far as I know) but that ain't a bad idee. Except it wouldn't be a Union, but an underground potical movement dedicated to the overthrow of the Speling Oligarchs. We would storm the Winter Paleass, seize the Speling Tsar and force him to fling open the gates of the Yoni School. Let speling anarchy rain! Phreedom phor Phonetics!

This bow thing...I don't know. As I say, I'm not really familiar with the stringed instruments that way. A bow is important, but surely not as important as the cello itself. But then, I don't know how a bow affects the sound.

The actual construction of the instrument is crucial, I do know that. That's why the Stradivarius violins are so sought after. He knew something other violin-makers didn't. He had a way...He also made violas...maybe cellos too..but it was violins in particular that made his reputation.

Is a violin without a bow, like one hand clapping?

Seems to me that a bow could make a lot of difference depending on materials used? There's got to be craftsmanship to it too. May be some are mass produced. The Stradivarius probably needs a hand crafted one? I am just supposing. Don't really know. But I have a vague memory of a story I once read about a poor girl having a violin and a poor bow, and longing for a good one, which in the end, I think she got.

Still I suppose a true musician can get good music out of a cheaper violin and bow? My Mom used to say: "A poor writer blames the pen." Maybe a poor msician blames the instrument?

So nowadays. a poor writer could blame the keyboard!

Talk to any musician and you'll hear that the sound of the instrument can be an inspiration. This, more than anything, is what makes a Stradivarius so sought after. Certainly, a bow would affect this.

But inspiration comes also from the way an instrument feels. The way it responds. The fret board on a guitar. The action of the piano keys. A particular reed on a saxophone can affect dramatically the way it's played.

A personal example: There is one tune that HWSRN plays which is quite difficult. He has played this tune on several different accordions. On some, it is easier for him, just because of the action of the keys.

But to return to sound. Joe Zawinul, formerly of Weather Report, a master of synthesizers and a musical genius too, talks about how just a sound can inspire a song. I've had this experience. Just a sound can stimulate a certain mood, or a melody, or an ambiance. The variety of sounds is one of the joys of synthesizers.

Re: violin w/out bow: you could still pluck it...and if a Stradivarius is the Mother of All Violins, then the player would have to be a Motherplucker.