In a fit of existential pique, HWSRN returned the Roland V-Accordion to the Lunchbucket Music Emporium. You remember the V-Accordion. I wrote about it some months ago. 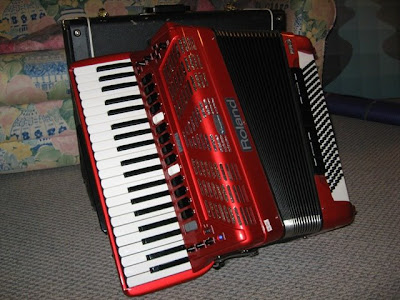 HWSRN says he had kept it far too long. After all, he only had it for a trial. But after working with it and playing it quite a bit he had come to appreciate its qualities better and begun to see how he could use it. There were still things he didn't like about it, but over time he began to see how he could work around these or adjust to them.

Anyway, they were unable to come up with a price that suited him. The head of the keyboard department at the music store kept repeating, every time HWSRN went to talk to him, about how they had never charged him rent or anything like that...which annoyed HWSRN so much that he finally resolved to return the accordion, write them a nice cheque for rental and let them put the accordion back up on the wall where it had languished for the previous year. So they got their rental, but no sale. One wonders which was more valuable?

HWSRN thinks they didn't really want to sell it that badly. He also thinks they failed to exercise a little bit of imagination around how they could use this for promotional purposes. But that's how it goes, eh? I say it was a breakdown in the customer/salesman relationship. It is, perhaps, a missed opportunity all around, but not, thank god, a life and death situation.

Says HWSRN, "It's only a bloody accordion...and a virtual one at that!"

Well, I don't know if this is an equivalent story, but I just sold one of my boats....

I ordered another boat, and decided I had to give one up in order to get the new one.

The new boat is much more expensive than the money I got for my old boat.

I loved that old boat. It was actually rather new for an old boat. I panicked at my computer course on the day it was being picked up by the new owners. I wasn't home and Bobby Bacon was taking care of the sale, and suddenly I was hit with this panic -I can't sell that boat!

But I did, and the world didn't fall apart...