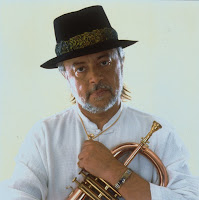 Last night HWSRN went to see Chuck Mangione and his band play at the old Square Centre of the Round Hole in good ol' Lunchbucket Ontariario. Now, it's been many years since Chuck Mangione was a major major, but that doesn't mean he can't still blow a mean flugelhorn.

And HWSRN reports that he surely did. He played a medley of his hit. And brought the house to its foot.

Some of you may know that Chuck lost nearly half his band in that plane crash a while back near Buffalo. I don't know, and neither does HWSRN, which players they were, but he says that the bass player and sax player were the only two on stage with music stands, so that's a pretty good indication. Nevertheless, the band was mighty hot. They played songs from Chuck's album, Fun and Games. They played Bellavia, named after his maiden mother's maiden name...a lovely Italian sort of ballad. They played Land of Make Believe, which is one of my favourite all-time tunes. They played be-bop...an interesting thing called Dizzy and Miles...which featured a poem at the beginning and the refrain "All the world smiles at Dizzy and Miles"...and then each took be-bop solos accompanied only by the drums doing light swing with brushes. They featured the bass player on Fun & Games. Chuck let the young sax player blow and blow on several tunes. Then they played Children of Sanchez, with the drummer singing...and playing an entirely different rhythm from what he sang...something quite difficult to do...(don't forget, the drummer's already moving all four limbs in polyrhythmic patterns, and then to add the voice!)

This was the last song of the set. Chuck said goodnight. And left the stage for about thirty seconds. Then he came back.

Of course, he'd forgotten to play the song everybody came to hear. Feels So Good.

Well, no, he didn't really forget. It was the encore of course. But for HWSRN, it seemed a bit lacklustre after the tour de force of Children of Sanchez. It was like, "Hey, let's get the tune over with and go back to the hotel room..."

Did you ever go hear Mel Brown play? Or play with him?

I only ever heard him play a couple of times. HWSRN never did get to play with him.