Update on the Hole in Mars

The New Scientist has a new picture of the hole in Mars which I posted about back in June. 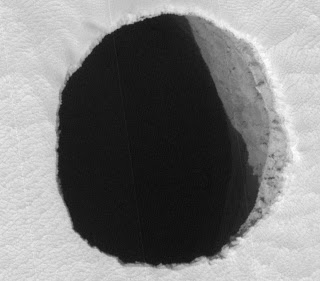 Really, them there canals...? Not canals at all. They're what's left of the gravel roads the Martians built...out of gravel they mined from this here big gravel pit.

We all know what eventually happens to gravel pits. They fill up with water. This must explain why the astronomers and astrogeologists and cosmic dowsers are all hyping the possible presence of water on Mars.

But anyway, who the hell cares? The water'll all get bought up by some giant interplanetary conglomerate, Coca Cola or Nestlé or somebody, and those dirt-poor subsistence farmers on the mountains of Mars will end up paying through their double-hinged noses just so they can grow a few dehydrated Martian apricots for export to Luna, where the tariffs will be prohibitive and freight costs extortionate.

And so it goes. Plus ça change.

Email ThisBlogThis!Share to TwitterShare to FacebookShare to Pinterest
Labels: Blinded by Science

Over the years I have read many books (Fiction) on Mars, Bradbury, Heinlein, Clark, Pohl, etc.

As far as I remember no one mentioned the gravel pit.

Often though a few of these writers used Mars as a means of social criticism of the current state of affairs on the good old planet earth. Heinlein used Mars to take on TV evangelism. Mars was a safe way to take on some social ills.

And Philip K. Dick, who I've been reading lately. The Three Stigmata of Eldritch Palmer, in which colonists on Mars become addicted to a substance called Can-D because it's the only way to adjust to life on their useless and hopeless farms.

Well, you know that Philip K. Dick was plugged in - he heard transmissions from outer space...

According to the official website, the K. comes from his mother's maiden name -- Kindred.

And those were pretty heavy-duty transmissions. One of his final novels, VALIS, draws heavily on his spaced-out period, and that novel is quite strange.

But then, so is A Scanner Darkly. Even Do Androids Dream of Electric Sheep?, from which Blade Runner was adapted, has its odd moments.