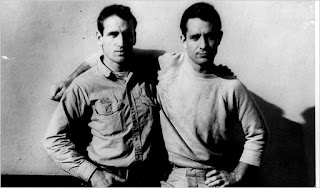 What encouraged you to use the “spontaneous” style of On the Road?

“I got the idea for the spontaneous style of On the Road from seeing how good old Neal Cassady wrote his letters to me, all first person, fast, mad, confessional, completely serious, all detailed, with real names in his case however (being letters). I remembered also Goethe's admonition, well Goethe's prophecy that the future literature of the West would be confessional in nature; also Dostoevsky prophesied as much and might have started in on that if he'd lived long enough to do his projected master-work, The Great Sinner. Cassady also began his early youthful writing with attempts at slow, painstaking and-all-that-crap craft business, but got sick of it. The letter was 40,000 words long, mind you, a whole short novel. It was the greatest piece of writing I ever saw, better'n anybody in America, or at least enough to make Melville, Twain, Dreiser, Wolfe, spin in their graves. Allen Ginsberg asked me to lend him this vast letter so he could read it. He read it, then loaned it to a guy called Gerd Stern who lived on a houseboat in Sausalito California, in 1955, and this fellow lost the letter: overboard I presume. Neal and I called it, for convenience, the Joan Anderson Letter...all about a Christmas weekend in the pool halls, hotel rooms and jails of Denver, with hilarious events throughout and tragic too."

Kerouac is still one of my all-time favourite writers. But I can't seem to define what it is about him...a certain nostalgia that he developed in later years, his Roman Catholic Buddhism, his devil-may-care alcoholism. His poetry. His evocation of the crazy heart of America. His style. His Beat-ness.

I think the jury is still out on Kerouac, and the rest of the Beats, for that matter, including Ginsberg. But you'll notice that although there isn't a great mass of fellow travellers like, for instance, with the latest Stephen King tome, Kerouac has never drifted far from the consciousness of American (and world) readers. There's an ebb and flow, but Kerouac's presence is constant.

I still like Kerouac, no matter what the jury may think.

Thanks for finding this quote—I’m intrigued now to find the letter he is referring to.

Hey John, nice to hear from you.

Kerouac does say that the letter was lost. I can't remember exactly, but I think there may have been references to it in On the Road, and perhaps other books where Cassady has a presence.

To all those who love Jack Kerouac – 2008 New Documentary
One Fast Move or I'm Gone: Kerouac's Big Sur. http://www.kerouacfilms.com

Thanks, Curt, for the heads up. One thing's missing from the website, though. How to get the film, or where to see it...

At least, that's what I noticed from my quick tour.

We will send information to those on our mailing list as we identify when and where the film will be available for viewing. Currently we are submitting to various festivals here in the US and around the world.
Stay tuned and thanks for your interest in "One Fast Move or I'm Gone: Kerouac's Big Sur"