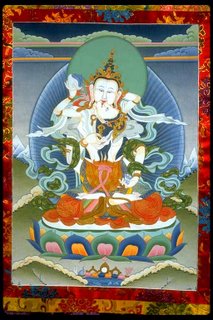 Vajrasattva (Vajra Hero, Tib. dorje sempa) "Dorsem" is the buddha of purification. As the "action" or karma protector, he also manifests the energies of all Buddhas.

My "history" with Vajrasattva seems to be a tale of how a deity picked me rather than vice versa.

Now, just to make things a little more confusing, here's an image of a vajra, the hand implement used in Tibetan ritual.
I borrowed this image, believe it or not, from a Dutch website.

The vajra is also a thunderbolt. I guess you could say it represents (among other things) the cataclysmic flash which is the direct realization of emptiness.

Wikipedia says, "The vajra destroys all kinds of ignorance, and itself is indestructible. In tantric rituals the Vajra symbolizes the male principle which represents method in the right hand and the Bell symbolizes the female principle, which is held in the left. Their interaction leads to enlightenment. Also the Dorje or Vajra represents the "Upaya" or method Tibetans name Vajra as "Dorje". Made to be worn as a pendant, it reminds the wearer, and the viewer, of the supreme indestructibility of knowledge."

(Actually, the "made to be worn as a pendant" comment doesn't quite make sense. Unless it's a pendant, which most of the time it's not. It's an actual implement which fits in the palm of your hand.)

More: in Tibetan instructions, vajra is also the term which refers to the penis. The vagina is called the lotus, a felicitous expression if there ever was one.

So vajra is thunderbold,(power),
is the realization of emptiness,
destroys ignorance,
represents the indistructibility of knowledge.

Can there be knowledge in emptiness?

How can knowledge be indistructable? If the world goes poof, where is knowledge?

The tree of knowledge is supposed to be on Earth. In Eden, in Africa, according to myths...

If knowledge is forgotten, where, how, will it be re-remembered?

My daughter and her friends in highschool not wanting to swear, replaced "Fuck off" with "Go ye forth and multiply."

They would have been creative too with, The Vajra and the Lotus, I bet. Had they known.

You borrowed the image from a Dutch webside, Larry. If you didn't allready know, the word 'stichting' means to found.
Founding Vajra, I guess it would say.

So Vajrasattva is your deity and it picked you. Is that sort of like a guardian angel? Or a guide?

Did you find your deity, meditating? Fasting?

I sure could use the Vajra to destroy my ignorance, eh? One fool can ask more than seven wise men can answer.

Go ye forth...I like that. I may start using that myself. At the moment, I tend to say "puck" a lot.

I'll tell the Vajrasattva story in a separate posting.