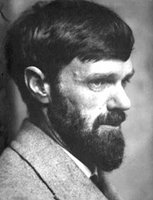 I have this book. I've had it quite a long time. A long time without ever really looking at it. It was written by DH Lawrence. Published in 1923, seven years before his death of tuberculosis. j

You know DH. That randy fellow. Wrote that scandalous book.

This book is not that one. Although I have that one too. Read it many years ago. I'll probably read it again. The virtues of recycling.

No, this book is called Studies in Classic American Literature. In fact, it appears to be a rant against the dry Puritan American soul, disguised as a review and analysis of early American writers: Benjamin Franklin, James Fenimore Cooper, Edgar Allen Poe, Melville, even Whitman. (I often think of the sign I saw in the rear window of a car a few years ago which read: There Is No Country In The World Called America) (I say, God Bless Amurrica!)

Lawrence enjoys himself in this book. He has a romp. I suppose he thought he was entitled, since he & his wife lived in the US for a period of time. In the first chapter about Franklin, he makes you understand why the author of Poor Richard's Almanack was indeed "poor." Poor Ben. Poor Puritans. Poor Murricans. Chained to their Oppositionism. Slaves to Moderation. (But perhaps only Public Moderation. Private inclinations are always another matter.)

Anyway, that's not really why I'm constructing this post. In the third chapter of the book, Lawrence starts in on Fenimore Cooper, but not without a parting shot at Franklin. I intend to quote the first paragraphs of this chapter, because this is where Lawrence predicts the future. Our future.

Benjamin Franklin had a specious little equation in providential mathematics:
Rum + Savage = 0
Awfully nice! You might add up the universe to nought, if you kept on.

Rum plus Savage may equal a dead savage. But is a dead savage nought? Can you make a land virgin by killing off its aborigines?

The Aztec is gone, and the Incas. [The Mayans remain, but clandestine. Tour guides for the ruins. LK.] The Red Indian, the Esquimo, the Patagonian are reduced to negligible numbers.

Où sont les neiges d'antan? [I can't find d'antan in my French-English dictionary. Babel-Fish, that next to useless engine translates this phrase as: Where are snows of antan? Duh. Now, Suzy Homemaker teaches French in her spare time & when her schedule permits. She tells me "antan" means "yesteryear." So there you have it. And I have it. And Suzy has it. Where are the snows of yesteryear? Dave Phillips, Canada's national weather weenie says there actually is less average snowfall over the last 20-30 years. So when you get all nostalgic about how you used to play King of the Castle on huge snowbanks overlooking the gritty streets of Lunchbucket or Kirkland Lake, you are remembering really and truly the golden age of snows....And now, back to our story...LK]

My dear, wherever they are, they will come down again next winter, sure as houses.

Not that the Red Indian will ever possess the broad lands of America. At least I presume not. But his ghost will.

The Red Man died hating the white man. What remnant of him lives, lives hating the white man. Go near the Indians and you just feel it. As far as we are concerned, the Red Man is subtly and unremittingly diabolic. Even when he doesn't know it. He is dispossessed in life, and unforgiving. He doesn't believe in us and our civilization, and so is our mystic enemy, for we push him off the face of the earth.

Well, there it is. Even now, the aboriginal chickens are coming home to roost. Or roast, as the case may be. And who are they roasting? All us interlopers. Ex-Europeans. Ex-Asians. Ex-Africans. The so-called Indian problem has never gone away in fact. The debacle down there in Malebonia, just south of Steeltown, is only the latest. In Canada, we have the shining example of Oka. Ipperwash. OK, so it's been a couple hundred years. The First Nations are patient, but unrelenting. And Lawrence is right. They don't believe in us and our civilization, our rule of law. They are following their own law, even if they have to make it up on the spot.

Here's the problem as I see it. Neither side has decided to recognize reality. The First Nations think they can still push us off the edge of the continent. Not likely. Coming waves of Asian immigration will overwhelm any countervailing force. The "new" North Americans have not yet recognized that they need to satisfy the First Nations. Whatever that means. What do they want? (What does Quebec want?) (It's the same question, probably the same answer: Mâitres chez nous...but difficult to qualify, fearsome to quantify.)

It's a dilemma, for sure. The Europeans -- English, French, German, Spanish, Portuguese -- usurped the entire continent and left the natives little corners. Somehow they must be recompensed. But the natives must also recognize that this is indeed the dominant culture here now, and come to some settlement that allows for this. The Six Nations protesters down in Malebonia have been flouting laws all over the place, thumbing their noses at the police and terrorizing the local population. (I use "terrorizing" carefully, but correctly.) That can't continue.

Land claims are all very well. But the First Nations people must know that we (let's say descendants of usurpers) are not going to just up and leave. Not anymore. Maybe 300 years ago. But not now. So, get over it, natives.

These days, the currency is money. Wampum, I guess. But we shouldn't expect the natives to be bought off any longer with trinkets. Maybe it's time to really pay.

On the other hand, maybe they can turn all the vices we white peeple brought with us to their advantage. Enough of being slain by demon rum. Turn it back on them. After all, I have lots of friends who go regularly to the reserve to get cheap tobacco. Casinorama is doing a fine business. Maybe the aboriginals can get their land back. Just feed us all the stuff we crave...alcohol, tobacco, gambling. We'll do ourselves in.

Email ThisBlogThis!Share to TwitterShare to FacebookShare to Pinterest
Labels: Books, Literature, US Culture