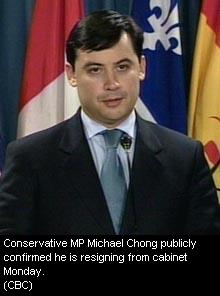 OK, I'm just cribbing from the Mothercorp, but the salient quote is this:

But Chong, who was responsible for federal-provincial relations, was left out of the loop when Harper was deciding on the wording of the motion. Instead, the prime minister consulted with former intergovernmental affairs minister Stéphan Dion.

In other words, Stephen Harpie bypassed his own Cabinet Minister to discuss and make decisions with a member of the Official Opposition (and, by the way, a candidate for the leadership of the Gliberal Party.)

Chong can talk all he wants about his philosophical opposition to this nationhood notion. He probly ain't lyin' neither. But you gotta know a snub like that from his own leader can't go unanswered.
Posted by Larry Keiler at 11:29 PM