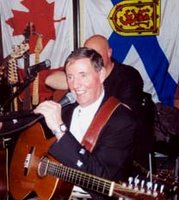 I actually got to play with him. Once. In Farguess at the Highland Games. He played Lord of the Dance and I was on the stage (such as it was) with him. Lord of the Dance is a great tune. Unfortunately, I didn't know it very well. In fact, even now, I can really only remember one line of it. So I played quite a few clinkers while John Allan played and sang the actual song. (Lucky for me, I've learned the knack of playing unobtrusively when necessary.) Cameron, being the professional that he was, just ignored the mess I was making and played right on through.

Forsooth! (That will be my word of the week.) Forsooth! I didn't really play all that badly, but there was one section where I couldn't quite figure out where the chord pattern was going. I invariably went in the wrong direction.
Posted by Larry Keiler at 7:06 PM