The Yoni School Election Watch Pt. 3: Dire Warning About the Dangers of Separatism 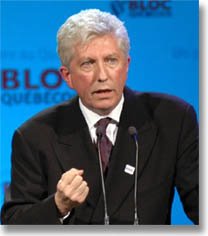 I had a good look at Gilles Deceit, the leader of the Floc Quebecois, on TV tonight. He looks supremely confident. He knows he’s going to blow the Gliberals out of the eau in Quebec. Even federalists will vote for the Floc because they’re so pissed off. Tabernac suitcase!

But I saw something else there, as well, which I hadn’t really noticed before. M. Deceit, with his careful coif of silver hair and finely chiselled, ruggedly handsome features, has a patrician look about him. Something of an aristocrat he is. And suspiciously French. I mean, Gilles Deceit looks French. Not Quebecois French. French French. As if he’s been sitting in Paris boardrooms sipping Perrier.

Therefore, I’ve come to the conclusion…and remember, you read it here first…that M. Deceit is not from Quebec. He is not pur laine. In fact, he is a plant. No, I don’t mean like broccoli. I mean, like a plant, a mole, a saboteur, a provocateur.

The question then is, who planted him? Not the CIA, not the FBI, not CSIS, not al Qaeda, not the Mossad, not the KGB, not MI5. Nosirreebob! It was the Gaullists. Gilles Deceit is a secret agent of the Gaullist party of…well…Gaul. In other words, il ne se souviens pas. Not Quebec for Quebeckers. Quebec for the French! Deceit’s secret plan is to rip Quebec from the heart of our beloved Canada and deliver it directly into the hands of the French Imperialists.

Mark my words, it’ll be another Algeria. Before long, Quebeckers will begin to whine and moan about domination by those arrogant French, who look down on them because zey hav zese funny accents. They’ll think they’re being treated as second class citizens. They’ll question their deportation from the picturesque Laurentians to the harsh, unforgiving wilds of Normandy. That’s when the trouble will start.

They’ll start raising ell. They’ll take that L and stick it between the F of Floc and the Q of Quebecois, and what will that spell? FLQ.
Posted by Larry Keiler at 10:56 PM

Me Again Larry,
Now you're messing with my Father Land! I agree that it is all pretty scary. I was there when the PQ gained power in 1979 just because all the parties stank and all the votes were split. I can see that happening to some degree in the Fed election and said so to my daughter. However I am hoping against hope that with all the French/English intermarriages that have occurred over the past couple of decades common will prevail.

Hey, then maybe ten years down the road, there'd be a rebel movement to rejoin Canada...

Yes, and the anthem would have to be Joni Mitchell's Big Yellow Taxi. "Don't it always seem to go, that you don't know what you got till it's gone..."

Hey Jude,
Did I say it was scary? My usual reaction to such events is, "Hmm? I wonder how this is going to turn out?"

It would be sad, though, if you had to have a passport just to visit the old homestead.