Calling the Guru from Afar 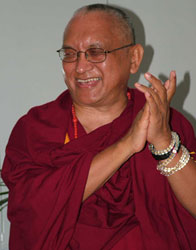 Sunday afternoon I dreamt of Lama Zopa Rinpoche. I think it’s somehow related to the fact that we recited the prayer Calling the Guru from Afar in the morning.

They say it’s auspicious to have dreams of your guru. And yet this dream was rather mixed in the feelings it aroused in me.

Perhaps this is because I’ve never actually met Lama Zopa Rinpoche. He’s my guru because he heads the organization in which I’ve received much of my Buddhist teachings. But I have a certain frustration over not having personal contact with this man who carries so much Dharma energy with him.

There were two, maybe three parts. I don’t remember anything about the first part. The next section started with my friend Annabanana. She suddenly appeared and (I presume) was going to give a little talk on literacy. She had with her a copy of the book on Universal Compassion, the Eight Verses on Training the Mind, which I had lent her. I asked if she was using that book and she said yes, indeed she was, implying that she was in fact going to use it in her presentation.

Next thing I knew, there was Lama Zopa Rinpoche, sitting on a throne, surrounded by monks and nuns, horns, drums, cymbals, the whole bit. In fact, we were suddenly in quite a large amphitheatre. My first thought was, now how did Annabanana manage to get Rinpoche to show up here? All my yearning to have a meeting with him, and here’s Annabanana pulling this surprise.

But then I got caught up in the surroundings, in watching Rinpoche, listening to him. Still, I couldn’t get very close. At one point, I walked up to the front of the section I was in, to a sort of railing. But it was still some distance from him. And there was too much activity. I eventually backed away, simultaneously content to watch and frustrated to have him so close yet so far.

Then, just as suddenly the event was over. Rinpoche got up with all his entourage and began to file out. The crowd rushed forward and we all ended up between two railings, as if in a paddock, lined up behind Rinpoche and the rest. Somehow I managed to be at the front of this line, but still not close to him. There were security or body guards just in front of me. And the crowd behind me began to push me forward.

Finally, Rinpoche’s group in front began to move with much fanfare. It was like a parade, with Rinpoche leading. But in fact he went in a circle. The front of the line, with Rinpoche leading, circled back in the direction from which we had just come. Suddenly I was amused. I wished I could tell the people at the back of the line just to wait and Rinpoche would come right around to them.

But he didn’t. In the twinkling of an eye, he just vanished. He never came back to the starting point. He simply disappeared. All that were left were the musicians and dancers dressed in traditional costume making a raucous noise as if to exorcise demons. I only shook my head and smiled, thinking, “Isn’t that just like a guru…?”
Posted by Larry Keiler at 10:54 PM

Hey, I think it's a wonderful dream. It carries so much in it - your journey, your desires, your understanding (in the circling back, the amusement, and then the poof, you knew it all), friendship & respect (annabananna), and humanity (that sea of people all trying to reach Rinpoche).