After All, It's Not as if Aslan Were an Ordinary Lion 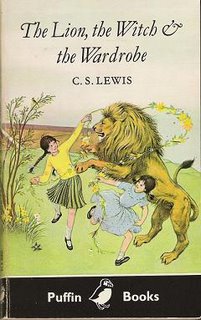 So this is the weekend that The Lion, the Witch, and the Wardrobe is being released. I think I’ll wait until it comes out on DVD. (Hate those multiplexes, hives overrun with drones selling fries, pizza, pricey popcorn and supersizeme kegs of watery pop and the actual reason for being there is reduced to a distraction what with self-serve ticket kiosks and unholy lineups and everybody yelling and running around like this is the most important thing they could be doing when what they’re actually doing is playing some video game in the hallway or talking on cellphone to nobody in particular while they wait in the second lineup to get into the stupid theatre where some acne-faced Project People reject regales you with lukewarm humour using all the bravado he or she can muster and then proceeds to make sure you know he/she has all the glutinous sugary treats you could possibly want at exorbitant rates as if it was the Movie Mafia you were visiting…OK, I’m done…)

Really, I wanna talk about LWW. This morning, the CBC1 program The Currant (is that a description of the size of its audience?) spent an entire half hour discussing LWW, Disney’s marketing scheme, and the supposed controversy being generated over LWW’s Christian content.

Here’s what I wanna say about this first: IT’S AN ESSENTIALLY CHRISTIAN ALLEGORY FER CHRISSAKE! Of course it has Christian content. And who really cares? The success of CS Lewis and his little Narnia Chronicles has very little to do with the Christian themes. It was because he told a pretty good story and captured the interest of kids. And the film will stand or fall by the same criteria. If the story ain’t any good, and they don’t tell it well, who gives a good god damn whether god approves. It’ll still bomb.

I’m pissed off at the media (CBC & others too) for trying to make an issue of it. It’s a commercial enterprise. If Disney wants to make Winnie the Pooh Goes to a Rave and Chills Out on E let em go ahead for all I care. This is not the same thing as Mel Gibson promoting The Passion of the Christ. For that matter, I don’t understand what all the fuss was about there, either. Lemme tell ya, if they get to the point where they’re telling me I can’t watch Ben Hur because it has Christian content and one of the extras died during the chariot race, there’ll be hell to pay, know what I mean Vern?

Now, I just reread the entire Narnia series this past spring. I can’t remember the first time I read LWW. I do remember that the series was introduced to us kids in class by a visiting librarian from the Lunchbucket Library. I don’t know about the other kids, but I ate them stories up. I bought the box set many many moons ago and I’ve read the whole series about ten times over the years.

This last time I was less impressed than I remember. Narnia doesn’t hold up as well as Middle Earth. But the stories carry some home truths like telling the truth, apologizing when you’re wrong or have been a nasty blighter, having faith, being brave, not letting pride overwhelm you, not eating too much Turkish Delight. What’s objectionable about all that? Even if Christ did say stuff like that?

I also don’t remember whether as a child I made any particularly Christian connections. Later on, you see them quite clearly, but mostly what I remember was the romance of kids becoming great kings and queens and getting to wear armour and talk like silly kniggits.

There is one interesting thing that I took more notice of in my last reading, though. In one of the books, The Horse and His Boy, the bad guys are clearly modelled after Muslims. They come from the south, wear pointy turbans like some sultan, brandish scimitars and have a bloodthirsty deity. Hmmm…some things never change I guess.
Posted by Larry Keiler at 9:22 PM

I recently watched The Kingdom of Heaven on DVD - got two thumbs up from the movie guys. Initially I was disappointed by the cliches in terms of story: within the first five minutes, hero's wife dies in grief over the death of their son, hero meets long lost father - a knight and crusader, then hero kills bad priest to avenge his wife, and joins his father to set off to Jerusalem to find redemption. As the movie progressed, it found its pace, and I started to see why the good reviews. It's an epic and so it blazes through things with a giant swath. But what was really interesting was its treatment of the Crusaders, esp. the Templars, and the Muslims under Saluddin (sp. may be wrong). The Muslims were often portrayed as more fair and humane that the Christians, and we saw a historical model of Christians and Muslims living together fairly peacefully at times. Yeah, killing on both sides, but the retelling of history in this way was unusual for a big Hollywood style movie, and I think in a strange way it does something to promote understanding. I wonder what will happen as a result of the latest George Clooney movie...

Okay, Narnia. I discovered the books as a religion major at university and read them voraciously. I also read Marian Engle's series about the Austin children - loved it. However, I tried to read it awhile back, and couldn't.... it didn't hit me like it did first time around, but that doesn't lessen the impact of the books on my thinking & mind. I'm glad in the world of Harry Potter Narnia at least got made into a big budget movie - I believe I've seen two other movie versions that were pretty weak. And considering Lord of the Rings, Tolkien and Lewis were friends, yes? I think so, maybe I am way off base.

C.S. Lewis wrote a very short book on grief that I read at the deaths of my parents - it was very personal and intimate.

I didn't see The Passion of Christ. Maybe it was a little personal statement against Mel's huge marketing blitz, and the popular viewpoint that somehow this version of the story of Jesus was somehow new - of course he suffered - the guy was lashed and crucified. The hoopla around the movie struck me in some ways as religious bullying - take your kids to see the violent version of the gospels... scare the bejesus outa them, or rather, into them.

Hey, Larry, you gotta choose your movie theatres better than you are! Stay away from the big ones - I've gone to see Harry Potter and even Star Wars on opening days in nearly empty theatres. Missed the big lineups- even enjoyed the popcorn without waiting in line... go downtown in that strange little community where you live, Lunchbucket, right? Go either late at night when the kids are in bed, or in the afternoon when they are at school...

Oh btw, I watched the latest Star Wars last night, and the Jedi are definitely presented from a Buddhist perspective, even with all that fighting. There was Yoda meditating, and then all that talk of letting go and non-attachment. In the end, Darth Vadar becomes Darth Vadar because of a love of a woman, and not wanting to experience the same loss/ separation he had felt at the death of his mother. There you go, blame the near destruction of the universe, and the fall from grace into the dark side, on the women in your life!!!

Just a quick comment on part of what you said.

Yes Lewis and Tolkien were friends...that Cabridge/Oxford don professor pipe-smoking thing. But one of the things they mentioned in that CBC program was that Tolkien didn't like Narnia. The reason was because Tolkien was really into creating alternate worlds, complete, with language, history, culture, geography and all that. Narnia was a patchwork of some of Lewis' favourite things, apparently, with a minimum of internal logic or explanation for why they were there.

So Tolkien was one of those literary-professor snob types....

Didn't grow up with, nor knew about C.S. Lewis during my childhood in Holland. The child in me in Canada read all about Narnia, she too bought the box set, still gracing one of the many book cases in her home. Much later when perhaps the child in me was hiding, I started re-reading the series. Maybe it was the adult in the child who suddenly got pissed off? Why, she wondered, were all the animals walking with Aslan precious, and why were the animals outside the (Christian?) circle of no importance? If one got hurt or died, no one cared. Except me who was reading it.

So, with a thud C.S. Lewis fell of his pedestal. But hey, that doesn't take away from good story telling. He was an awesome author.