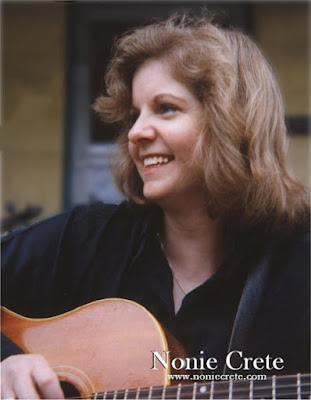 My very good friend, singer-songwriter Nonie Crete suffered a brain aneurysm last Thursday, on the day of her album release concert. It came as quite a shock to everybody, including HWSRN, who played accordion and keyboards on many of the songs on the CD and was scheduled to play the concert with her. He tells me he heard the news only an hour before he was to have gone to the theatre for set-up.

I haven't had any news of her condition since Friday morning, but at that point she was (obviously) not in the best of shape. The doctors had not undertaken any surgery yet, but were monitoring her condition closely.

Nonie was really excited about this new CD and about having a full band backing her up. I think she thought of this as a sort of break-out recording, even though she's already recorded something like 6 albums and is quite well-known regionally and has had some national radio airplay.

But now, we're not sure what's gonna happen. Everything I hear about brain aneurysms discourages me. Except for the fact that she is alive! And being looked after by one of the best neurosurgeons in the country.

All this got me thinking this weekend. About Dharma. One of the Lam Rim teachings is about our precious human rebirth...how rare it is, how we shouldn't waste it. And one of the sections of that teaching is about death...how we don't know the time, and how there are so many potential causes of death compared to the "causes" of human life. As they say, any little thing can cause your death...an organism you need a microscope to see can attack you and kill you. Or an aneurysm...unsuspected until it strikes. So many causes of death, it's a miracle we survive more than a day!

Nonie turned 50 in May. You expect her to have another 30 years or so. We all expect to have another 30 or so. Or 40. None of us ever gets up in the morning and says, "Well, I expect I'll die today..." But maybe we should. In fact, the lamas teach us that, in a way. Expect to die today. It focuses the mind on the important things.

Well anyway, Nonie has not died yet. And we are all sending our positive energy to her for a full and speedy recovery. And I mean full because it would be a shame to have that talent impaired.

I would like to ask all my Buddhist friends to do Medicine Buddha practice, or tong len, or Chenrezig...whatever suits you, for Nonie and all suffering sentient beings.

I've included a song here from the (as yet) unreleased album, Comin' Home. The song is called Where Have My Angels Gone? Right now, we're all hoping they've gone to the hospital where Nonie is. (I'm not sure whether this embedded player will work. DivShare is not entirely reliable, to my mind. Sometimes it works, sometimes it doesn't. But you can also go to Nonie's MySpace page to hear cuts from previous recordings.)

Thanks Larry and HWSRN, for letting us all know. I know we will all pray for Nonie in our own way.

Again we are confronted with the knowing that we never can take life for granted, and that "We don't know life at all."

I too am a friend of Nonie's. Spoke to Eugene this morning Tues. 23 about 10:00 a.m. Nonie is doing much better. Out of ICU still in pain but recovering miraculously (nurse's comment). Everything is looking good for a complete recovery. She will be laid up for quite a while. So keep a look out for fundraising concerts. In the meantime donations or cards can be sent to me Joanne Fahy 98 Wimbledon Road Guelph, Ontario N1H 7X1 and I will get them to her. Her new CD will be available shortly.

I am Nonie's sister Nancy. I was down in London with her on Thursday. She was amazing. So calm and in control, doing what she needed to do with grace and dignity. I am overwhelmed with the love and support of her friends. On behalf of all of the Thompson family, we thank you.
Nancy Gendron (Thompson)

I spoke with her son yesterday who confirmed the surgery was a great success and, as Nancy already mentioned, Nonie is doing much better than expected. Apparently she has already been up walking around. I've known Nonie for over a decade and this comes as no surprise to me! She'll decide when her time is to go and until then, she'll continue to fill us with hope, strength, love and music.

Think good thoughts Larry... although you're right that most cases of brain aneurysms don't have a happy ending, this one is clearly different. (The primary reason being is that it was detected in advance and removed. That almost never happens.)

Another sister thanks all of you for you prayers for Nonie. I spoke to Nonie on the phone yesterday and all she could talk about was how wonderful and supportive her friends were, she was overwhelmed by your prayers and generosity of spirit. Keep up the good thoughts, Jennifer

Thanks to everyone providing updates. My last update was from Eugene several days ago, so it's good to hear the progress she's making.