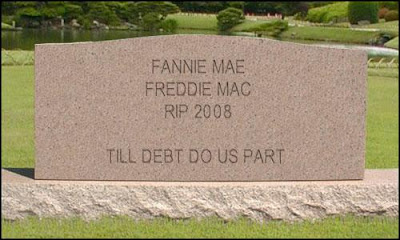 I haven't had anything to say about the credit crisis in the US, which is affecting financial institutions around the world. And there's a good reason for that. I don't have the slightest idea what it's all about. But if you want an excellent primer on what's been happening for the last few months and the tumbling dominoes of the last few days, go here and for more analysis go here. Bottom line? It's all about gambling. High risk gambling. And government failure to regulate based on ideology.

But as a layman (not a Lehman, fortunately) I have something to say about this. As I understand it, this whole thing started to unravel as a result of what's called the "sub-prime mortgage crisis." It amounts to this: financial institutions were lending money to homebuyers at below prime interest rates. From the first moment I heard this, my reaction was: WTF???? How can you lend money for mortgages at below prime and make money? Obviously, I'm not the money market wiz some of these guys were, eh? But when it comes right down to it, I think these Wall St. wizards were running a sort of Ponzi scheme, a financial tower built on quicksand.

I believe it started with Bear Stearns. What the hell is a Bear Stearns, you ask? Damned if I know. I'm just a poor schmuck of a wayward pote. A brokerage firm I think. Used to live on Wall St. Well, the brokerage went broke. Hit a Bear market and suffered Stearns consequences. The Bear Stearns cupboard is bare. Barely there. The reaction around the board rooms was something like, "Whew! Glad it's not us! But after all, it's only one company..."

Fannie Mae and Freddie Mac? Who are they, you want to know? Not who. What. Mortgage companies basically.

Fannie Mae and Freddie Mac? Now, I know the US is the home of Disneyland and Ronald McJob, but what kinds of names are those for serious companies (formerly) worth billions of dollars and holding the fortunes of thousands of struggling homeowners in their greedy little paws?

Fannie Mae? That's the title of an old R&B song by Buster Brown. Later became a signature tune of Jaco Pastorius, who turned it into a bass solo tour de force. But the name of a giant mortgage company? Give me a break.

I looked up the lyrics to Fannie Mae, just to see whether there was any sort of divination to be had there. Something spooky happened. The first set of lyrics to come up were these:

I no o o o for me, I no-o-o-o for me
Well I ain't been in trouble and so much misery
You will notice I put one line in boldface. What’s this about debt? I ain’t been in debt until I met you Fannie Mae? Huh! I bet there are a lot of former homeowners singin’ pretty much the same tune!

However, those are not the lyrics Buster Brown actually sang. The words he actually sings on the recording (perhaps a little hard to decipher) are: Now I ain’t been myself, girl, since you’ve been gone. Where did these words about debt come from? I dunno. (Some smartass fooling around on the song lyrics sites?)

Meanwhile, there’s also the first line of the song: Well I want somebody to tell me what's wrong with me… I’ll tell you what’s wrong with you Fannie Mae! You didn’t take care of business and you abused the trust of your clients, that’s what!

So the Feds had to pony up to keep Fannie Mae and Freddie Mac’s asses afloat.

Then came Lehman Brothers. Investment bankers. It appears they invested mostly in their own bank accounts. 180 years or some such down the tubes. Greed, I tell you…

Some people, like Rosa Brooks in the LA Times, while satirizing the predicament of the US economy, have tossed out the “S” word – yes, the big bogeyman SOCIALISM. Never mind that she and others who do this simultaneously disseminate and perpetuate the delusion that government control of some institution equals socialism. (That could be the subject of a whole other post…which I’ll probably never get to…) In North America, at least, we have succumbed to the myth of the middle class. Except for the upper stratosphere, which in reality commands most of the wealth (an obscene proportion of it…) and the really destitute homeless pariahs of society, everybody supposes themselves to be a member of the middle class. Well, I have breaking news… Yo! Bubba! I don’t care what your wages are. I don’t care if you’re on salary. Maybe you’re driving a Hummer and you got a nice little hot tub out there on the deck. I don’t care. If yer workin’ for the man you ain’t middle class. Yer working class and you oughtta wake up to that fact.

Meanwhile, just because a government assumes control of some major industry, or a portion of it, that doesn’t mean it’s suddenly become socialist. In fact, the whole purpose of all these bailouts and the hundreds of billions of dollars being poured into these failing companies is to bolster the twisted underpinnings of post-modern capitalism. There’s nothing socialist about it at all. You could say the government is desperately trying to find a way to help someone continue to make a profit out of this whole mess. And be assured that someone will profit. Here’s another phrase, or paraphrase, that you’ll see if you look around: what the Feds are doing with these bailouts (which comes from tax money squeezed out of all those people who think they are middle class but who really are well-dressed working stiffs…not the gamblers who created the problem) is privatizing the benefits and socializing the risks. In other words, someone will profit (not the working stiffs), but if they don’t profit, the working stiffs will take the loss. As they already have.

Now, if you were to define socialism as a system of government in which the politicians really cared for and looked after the interests of the vast majority of the people, in ways that mattered to them (which does not include, in my books, massive subsidies to mismanaged giant corporations in the hopes that meaningful jobs will trickle down), required (on pain of permanent liquidation…) corporations to follow the environmental, health, safety, and financial, rules for the benefit of the people they employ…If you defined socialism as just that, nothing more (and really it is so much more) then I say, the US and Canaduh too and probably every other country in the world could stand a good dose of socialism!

This financial boondoggle would look good on its perpetrators, just what they deserve, if it were not for the fact that it’s not they who are really suffering. It’s the ordinary people, Joe and Jane Lunchbucket who really take the hit. When they lose their houses, they lose their life savings. Just ask the people in Slovenian Village in Cleveland.

And why? Because we’ve allowed our economy to be run and manipulated by speculators and gamblers. Really, the stock exchanges are nothing but tarted-up casinos where guys in suits lay bets on the price of virtually everything there is. And everything is for sale. Especially if you’re using Other People’s Money. OPM. You think drugs are the problem in the good old U.S. of A? No, it’s OPM and gambling and betting on the price of gas! That’s the addiction that’s killing the golden goose.

Look around you. The price of gas. Artificially boosted by stock market speculators. The housing boom. Obscenely boosted by manipulated mortgage rates, ie. sub-prime mortgages. Food prices going through the roof when supposedly our methods of farming and production are more efficient than any other time in the history of the world? What is wrong with this picture?

But just to return, at the end of this unconscionably long diatribe, to the subject of the bailouts and the mismanagers and CEOs who mismanaged themselves into a Federal bonanza…

If I were king of the world, my first move would be to seize the personal assets of all those guys, and I mean every last dime, and spread it around to the victims of their mismanagement. Maybe we’d save somebody’s house! 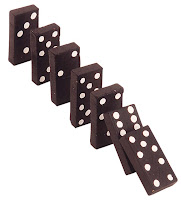 Email ThisBlogThis!Share to TwitterShare to FacebookShare to Pinterest
Labels: Biz, Economy, Mass Kultur, US, US Culture