On July 3, 1863, the Civil War Battle of Gettysburg in Pennsylvania ended after three days in a major victory for the North as Confederate troops retreated.

Believe it or not, I've always been fascinated by the US Civil War. As a kid I always cheered for the underdog in that war, ie. the Confederate Army. Even tho, up here in Canada, we were given to understand that it was the North that was on the side of the angels, being against slavery and all. Not quite sure why I was enamoured of the Rebs. Except that I liked their uniforms better (when they had uniforms...) And I liked their flag better, and even bought a big one on my first trip to Tennessee. Also, perhaps, because they were rebels...given my personal history of resistance to authority...always the one who wants to know why.

It took many years to realize that the Civil War was more than just about slavery. It was about a rural South and an industrial North. It was about land versus capital. It was about States' rights. In a way it was a war about people's right to self-determination. The South wanted to go its own way. The North didn't want to let that happen. There is a certain irony in holding a war over self-determination on behalf of a territory that condones slavery, but be that as it may.

In spite of my fascination with the Civil War, I'm certainly no expert on it. All I know is, it resolved the issue of secession, and slavery...sort of...

To this point, this post has been rather frivolous, so in remembrance of Gettysburg, I must redeem it somehow. So, first of all, I include this actual photo of the day of the Gettysburg Address, the only known photo of Lincoln on that day, which you can find here: 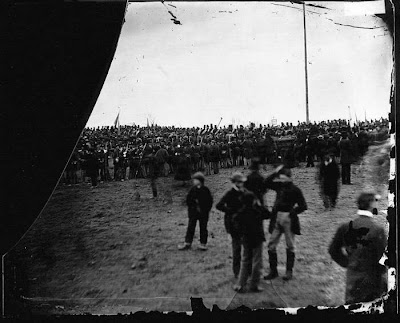 And here is the text of what he said. I'm sure our Murrican friends have heard this hundreds of times, but it certainly bears repeating, especially since tomorrow is Independence Day:

****
Fourscore and seven years ago our fathers brought forth on this continent a new nation, conceived in liberty and dedicated to the proposition that all men are created equal.

Now we are engaged in a great civil war, testing whether that nation or any nation so conceived and so dedicated can long endure. We are met on a great battlefield of that war. We have come to dedicate a portion of that field as a final resting-place for those who here gave their lives that that nation might live. It is altogether fitting and proper that we should do this.

But, in a larger sense, we cannot dedicate, we cannot consecrate, we cannot hallow this ground. The brave men, living and dead who struggled here have consecrated it far above our poor power to add or detract. The world will little note nor long remember what we say here, but it can never forget what they did here. It is for us the living rather to be dedicated here to the unfinished work which they who fought here have thus far so nobly advanced. It is rather for us to be here dedicated to the great task remaining before us -- that from these honored dead we take increased devotion to that cause for which they gave the last full measure of devotion -- that we here highly resolve that these dead shall not have died in vain, that this nation under God shall have a new birth of freedom, and that government of the people, by the people, for the people shall not perish from the earth.

Not too shabby. You can find audio versions of the speech at American Rhetoric.

Email ThisBlogThis!Share to TwitterShare to FacebookShare to Pinterest
Labels: US Culture, US History

I too have a interest in the Civil War and get obsessed by odd stuff. For instance how many soldiers, nurses and doctors died because of mecury poisening.

The anticeptic of the day.

Ummm many. We don't know. many suffered after the war with mercury symptoms. Sorta like Gulf War Syndrome.

I know Emily Dickson was a nurse during the civil war. her symptoms suggested mercury.

I am trying to find out more.