8 Wonders of the World by Internet

The LA Times is reporting that voters on the Internet have chosen the modern version of the Eight Wonders of the World. How come I didn't know about this? I always find out stuff like this after it's over.

Here's a little of what the Times says about the process:

The popularity contest was the creation six years ago of Bernard Weber, a Swiss filmmaker and self-styled adventurer. Nearly 200 early candidate sites chosen by Internet balloting were scaled down by a panel of experts to 21 finalists, each from a different country, from Greece's Acropolis to the Statue of Liberty.

Online and telephone call-in voting on the finalists began a little over a year ago. Nothing prevented repeat voting by fans, citizens, governments, tourism agencies, you name it.

Weber promoted the project with flashy appearances in hot-air balloons, on camelback and inside a blue blimp, traveling to each of 21 final candidates.
I believe they only chose seven winners and included the pyramids at Giza automatically because the Egyptians were insulted by the mere suggestion that they should be subjected to a vote.

So here's the list. I don't know if they're in order. Or if there is any order. Some of them might be out of order. (I think there's been an Out of Order sign on Chichen Itza for some time. Most of them were undoubtedly made to order, however. Also note that nearly all of them are not what you might consider "modern".And here are the photos: 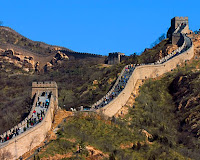 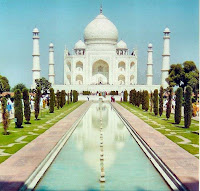 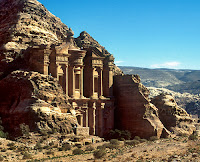 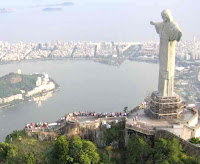 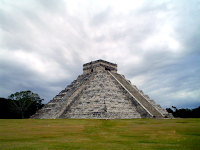 Hey Larry, I can't believe you missed this one. They must be censoring your mail at the Yoni School...

I did indeed vote, maybe a year or so ago, but I can't remember what I voted for.... will have to check...

No, Larry has not gone AWOL, but he got very busy, temporarily, doing other things. Thank you for noticing. Larry was soooo busy, he didn't even notice himself. Larry will post...soon.

Meanwhile he poses the question, "How does one notice oneself?"

Well, if you have a split personality - HWSRN - then I guess one can notice oneself....

Hey Larry—I missed it too, so you’re in good company (in my opinion).

I was distinctly underwhelmed by some the choices, but that’s just me—perhaps not always good company.