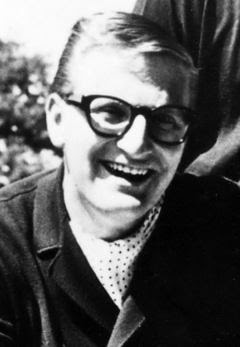 Hank Medress died today in Manhattan at the age of 68. For those of you who don't know, Hank was the owner of that amazing falsetto on The Lion Sleeps Tonight.

That song is so old, recorded in 1961, and we've heard it so often, that we tend to dismiss it the moment it shows up on our radio. But listen to it again now. Sure, the production's dated. (So am I.) But voices like that never really go out of style.

The Lion Sleeps Tonight was first popularized in the 50s by the Weavers, and I know it's sort of politically correct and nostalgic to wax poetic about the Weavers and their folky sound, but really, the version by The Tokens is it. No others need apply. No Lion King. No Three Dog Night even. No Beach Boys or whoever.

The song is based on a Zulu melody. Before the phrase "cultural appropriation" was invented. Elvis appropriated the Hound Dog. The Weavers went even further...all the way to Africa. Johnny Mathis brought ska to an admiring Murrican audience with Hold Me Tight. Did somebody mention Paul Simon?

Is/was it exploitation? My own view is that it's a symbiosis. Each learns and benefits from the other. As long as we're all approaching it with a degree of honesty and compassion...

Hi !
Just wondering since I heard so many people saying this, did paul Simon have anything to do with the lion sleeps tonight ? 'cause, when I checked on his official site there is no evidence he ever played or sang this song in his life so...why the amalgam ?

Ah, good question. In this case, it's the associations my mind made as I wrote the post. I got to thinking of Paul Simon and how he at one point got involved with Bolivian (or was it Peruvian) music and recorded a live album with a group called Urubamba. Then of course, there was Graceland, which may have been his all-time best-selling album, and on that he was into South African and Ladysmith Black Mambazo. That made them famous worldwide. But it occurred to me that there's a fine line between promotion and exploitation. We'd like to think that people like Paul Simon are not exploiting other cultures, but rather trying to raise awareness. Sometimes it's difficult to tell.

so happy to find good place to many here in the post, the writing is just great, thanks for the post.
bestsleepapneatreat.com - Upper Airway Stimulation Therapy