Sam the Record Man Closes Down 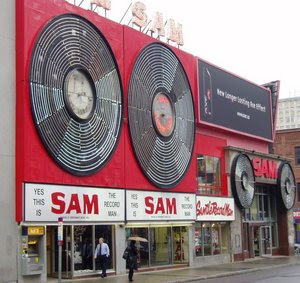 The flagship store of Sam the Record Man is closing down in old Hawgtown. A victim of modern technology. Ain't nobody buyin' CDs hardly anymore. How can even an institution like Sam's keep up?

Of course, I feel as if I'm solely responsible for the demise of this landmark. I just didn't shop there enough. (I have an excuse now, squirreled away in the Yoni School as I am for god knows how much longer...) In fact, hardly at all. Even when I lived in Hawgtown.

Still, in the misty days of my youth, Sam's was Mecca. Music Mecca. You would go in there and just wish you had a pot full of money cuz there was so much to buy. You could hardly decide where to start. All that music! Anything you wanted! Amazing prices! (In those days, some of the prices were amazing. Later, as Sam's became a chain, the prices became amazingly homogenized with the rest of the industry...)

I bought my first Steely Dan album there. I bought records there on my honeymoon. (Yessss, I had a honeymoon. It was short. I still have the records.) I bought an album by a loony called Screamin' Lord Sutch who drove around in a Rolls Royce painted as a Union Jack. Crappy album, really, but Lord Sutch could afford to pay guys like Jimmy Page and Jeff Beck and Nicky Hopkins to back up his screams. How could you not buy it? 99 cents.

Will I miss Sam the Record Man? Probably not. Will I remember? Definitely.

I remember some years ago when many of the Sam The Record Man chain stores were closing and it was greeted as dismally. Yes, I will miss it too. I used to work there, when I first returned from my mega year long journey through California on my motorcycle. I needed a job and it was a great place to be. Albums were just starting to go out of style completely. I remember the twin Guns & Roses albums (blue and yellow, can't remember the title) were among the last releases on vinyl we had for sale. It was a short stint I had working there, just a couple of months. But I have fond memories.

All things must come to an end eventually.

Mothercorp had Bob Sniderman on the phone-in show today. You wouldn't believe how many people phoned in that used to work there. One guy even who worked at the original store on College St. and remembered Bob's grandma.

Yes, it was/is a Toronto landmark. It's not too surprising to hear that many people worked there. It was an interesting place!