A Quarter for Your (Paranoid) Thoughts 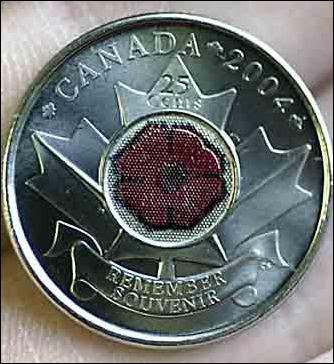 Really, this is too much!

AP reported yesterday that some visiting US Army contractors spotted an outlandish coin while travelling in Canada, and they considered it to be so suspicious that they filed espionage reports about it.

The suspicious coin turned out to be the one shown here, the famous (only in Canada, you say?) "Poppy" quarter, the first colourized coin in the world.

It caused quite a sensation (only in Canada, you say?) when it was issued in 2004, because the government chose TimHo's to be the main distributor of the coin...proving once again that Canajuns really are all TimHoes.

I don't like to be too critical but sometimes you just have to shake your head. We Canajuns are often astounded at the appalling ignorance of our Murrican neighbours to the south. You know, the home of Mom, apple pie and a Commie under every bed.

Especially if it's a Canajun bed. (Didn't some Yanqui senator call us the Republic of Canuckistan or something like that? Clever enough, and lots of Canajuns got a laugh out of it, but it was deliberately inflammatory. But never mind, quite a few loose-mouthed Canajuns are also guilty of that form of idiocy with regard to our Friendly Giant neighbours.)

The poppy is the symbol (only in Canada, you say?) of war remembrance and it is inspired by this pome, written by a Canajun, and proclaimed by the Arlington National Cemetery as "one of the most memorable war poems ever written". Arlington National Cemetery is, I believe, one of the better-known institutions in...where was that, now?...oh yeah, the Excited States of Murrica. (So that must mean that not all Murricans are appallingly ignorant, praise the Lord! and pass the ammunition...)

IN FLANDERS FIELDS the poppies blow
Between the crosses row on row,
That mark our place; and in the sky
The larks, still bravely singing, fly
Scarce heard amid the guns below.

We are the Dead. Short days ago
We lived, felt dawn, saw sunset glow,
Loved and were loved, and now we lie
In Flanders fields.

Take up our quarrel with the foe:
To you from failing hands we throw
The torch; be yours to hold it high.
If ye break faith with us who die
We shall not sleep, though poppies grow
In Flanders fields.

Now, I don't expect the average Murrican to know this pome was written by a Canajun, or to know the pome at all, for that matter. It's a Canajun institution, for sure, and most Canajuns don't know all the words. But neither do I expect Murricans to come to Canada and proclaim, "Hmm, that's a mighty suspicious pome! We better test it to make sure it ain't gonna blow up!"

Which is what the US Army contractors did. (Or, rather, the Defense Security Service.) They suspected nano-technology! I suspect that nano-technology represents the size of the intellects involved.

What I want to know is: What the hell are US Army contractors doing in Canada anyway? I thought the war was somewhere else. What? Were these maybe a coupla Blackwater Boys on vacation in Niagara Falls, spending the combat pay they earned protecting VIPs in Baghdad? One of them buys a pack of gum and gets the quarter in his change? And, we Canajuns being so friendly (he wasn't being shot at by desperate Iraqis), he didn't realize he was in a furrin country where the money might be different?

And then, to compound the stupidity (and the arrogance) they label this coin a secret weapon that was somehow planted on them. In Canada. Which is the country that has had the longest-standing friendship with the US and is, in fact, an ally in that other adventure in Afghanistan. I ask you, should we be surprised when the US gets a bad reputation around the world? A nation that has considerable difficulty distinguishing between true friends and enemies.

Then again, maybe it was just four guys from Detroit on a weekend jaunt to the casino in Windsor who decided to play a practical joke on the Defense Department, just to see how far it would go...

Boy this really symbolizes the depths of stupidity my country will sink to in order to keep fear in the hearts of the people. Without fear they couldn't go on with their faux terrorism propaganda, or their enslavement of the world, under the guise of protectionism. It's all a part of the scam.