Adolphe Finally Gets Some Sax

Believe it or not, it was on this day in 1846 that Adolphe Sax patented the saxophone. It had already been around for several years, but he only got around to making it official, I guess, in 1846. Naturally, others attacked his patents and actually drove him into bankruptcy twice...hmmm...seems like things haven't changed much in 160 years. Owning a patent guarantees neither that you are right nor rich.

But just think...
Without him, no Charlie Parker.
No John Coltrane.
No Clarence Clemons! 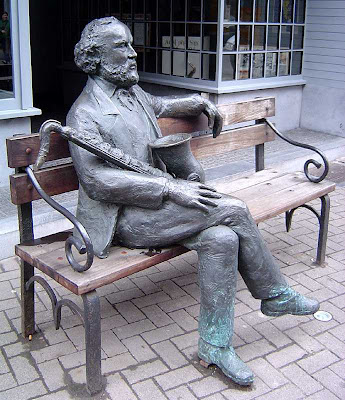 Here's a photo of Adolphe Sax busking in front of his birthplace in Dinant, Belgium. People who know him say he's a cold, hard man...doesn't talk much.

Glenn Gould sits on a park bench in Toronto...

There are many sax players who would throw flowers at old Adolphe. I play the flute and they go as far back as whistling on a leaf I believe. There was an old sax player in a building I use to live in, who always referred to my flute as a horn. Sax players have this certain attitude. Maybe, because Sax's are so big or they inherited it from Adolphe? What do you think?

Hmm, I've never really noticed attitude from sax players. Trumpet players, yes. Brassy, they are. Tend towards prima donna-ness. One-upmanship. You can see why, of course. It takes noive to play an instrument that was made to stand out...and certainly does when the player cacks a note.

Sax players search for that technique to get just that certain squeak that no one else can get.