OK, so I have this book. That makes 3 now. A lovely book. Le Morte d'Arthur by Sir Thomas Malory. Lovely book. Big. Oversize you might say. No pocket book here. Big. Boxed. A pleasure to behold. (Not necessarily to hold though. Big. Heavy. One must sit at his/her leisure, preferably in a Monty Python-style comfy chair.)

"A facsimile edition of the Dent edition of 1909, containing the complete Caxton text, over one thousand examples of Beardsley's illustrations and designs, and ten illustrations omitted from the first edition."

Had this book for years. Tried to read it once long ago. Put off by the bad language. And the inconsistent speling. I don't really mean bad language. Archaic language. Hard to read. Strange words you have to suss out the meaning by the context or some modern word that resembles it faintly. So...I put it back on the shelf where it made a fine addition and decoration. Boxed.

However. Illustrations by Beardsley! This is a treat. Illustrations and illuminations. Some full page pitchers! Every page has a sample of Aubrey Beardsley at his oddest & taciturnest. Not a single smiling face. But every drawing has that odd combination of medieval and ultra-modern so characteristic of Beardsley.

So I picked it up again a few days ago. After a while I thought me to look in the back of the book and what did I see? A glossary. Praise be to gods of Avalon!

Now, these kniggits! What a story. As far as I can tell, they are the medieval version of these guys:

Smackin each other around the bend at the drop of a kerchief. One hundred pages in and there's been incest, murder, enchantment, slaying of damosels, mistaken identity, false imprisonment. And oh yeah, Arthur's conquered Europe, killed the Emperor of Rome and had himself crowned Emperor. Hmmm. Apparently the "commons" like him.

I can't see much about the rule of law. It's a strange law those early Britons had. Plus a plethora of kings. Warlords I'd say. All these kniggits promising ten thousand men here, twenty there, thirty forty...battles of sixty thousand with two-thirds killed in two pages. Just what exactly was the population of Britain then? A miracle there are any left.

Now, here's Arthur's Round Table. The Dons of the Emerald Isle. The full patch members: 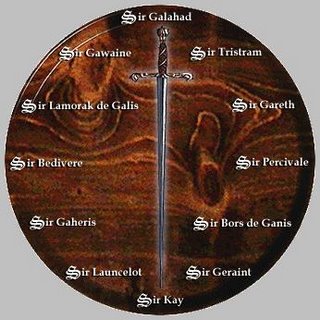 Notice there are twelve. With Arthur, that makes thirteen. How Christian is that? And there's even the one that betrays Arthur by screwing around with his wife! Betrayed with a kiss!

On the other hand, how much did Malory know? That when he tells the tale of the Sangreal, he's poking a stick in the eye of the Pope? Maybe. And he also mentions that Arthur makes somebody (I already forget who) the Duke of Lorraine. A significant post in the later history of the Grail and the Knights Templar. Malory often mentions the French book which seems to be his primary source for these tales. Those French, always the troublemakers. I fart in your general direction!

Some trivia: Malory tells us that the Round Table was in fact more than these twelve. A full complement was 150. Can you imagine 150 Hell's Angels roaming around southern Ontario pretending they were actually the cops? Gang wars!

More trivia: I think I've figured out how e.e. cummings came by his style. Here's a passage from Malory. I've put it into lines, instead of the prose:

But Sir Gawaine's spear to-brast,
and Sir Lancelot charged so sore upon him
that his horse reversed
up so down.

Yet more trivia: e.e. cummings didn't himself choose this lower case business. His publisher decided it for him.

Yet moremoremore: What a mish-mash that old English is eh? Mr. Glossary tells me, for example, that the word seker or syker means certain. The German word for certain is sicher. And of course, lots of French words too.

Yet one last more: A photo sent by the Hells Angels to some website posting pictures after the London Underground bombings to tell the world Londoners were not to be intimidated: 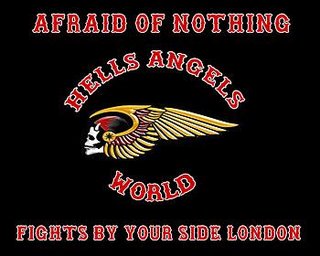 A comforting thought, no?
Posted by Larry Keiler at 8:42 AM

So where did King Arthur sit at the table?

Twelve seats - looks like a clock to me. Maybe there is some secret number magic there, since the Knights Templars did like that kinda thing...

All things are zero logic.

As for the good King falling in love with his best friend's wife, and she falling in live with him, just don't blame the woman! There's enough of that to go around in the story of Eve and the Garden.

I think the three - Arthur, Lancelot, and Guinevere - all loved each other - various combinations - including Arthur and Lancelot - if only in the closet. It is indeed a love story on many levels. And with that, comes hurt and pain and betrayal, at some point. Ah, if the boys had only stuck to their crusades...

King Arthur sat at the head of the table.

The Christian symbolism is apparent. Christ & twelve disciples. The Templars would certainly have gone along with that, I think. (Except that one of the twelve would have been Magdalen, eh?) And if Holy Blood & Holy Grail, (Da Vinci code) are right, what else were the Crusades about but the Magdalen? The recovery of the Sangreal.

So far, I have the feeling the love lives of these kniggits were more messed up than average. Like the Greek myths, I have difficulty understanding the logic or motivations of these people.

(An aside: I always had trouble with the Oedipus story. His tremendous guilt baffled me, given that both the killing of his father and the marrying of his mother were circumstances beyond his control. He didn't do these things with intent. They happened because he was deprived of an essential bit of information, not because he consciously willed them. I suppose the Jungians (or Freudians) would have something to say about my bafflement...I'll never get out of this Yoni School now...)

Tell me, Herr Keiler, vhat do you sink of your muzzer? Ven you look at zis ink blot, vhat do you see? Interesting. Do zey all look like Victoria's Secret?