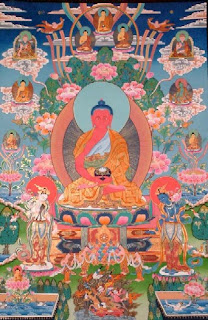 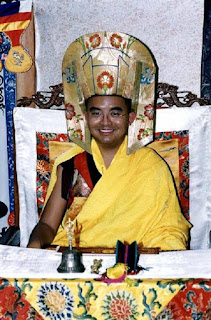 (Opening Note: This is my second draft of this particular post. The first was lost because it failed to save. That has happened more than once since Blogger introduced its Autosave function. A lesson in impermanence. Don't you just hate it when your immortal prose turns out to be nothing more than electrons that zigged when they should have zagged?)

It's been two weeks now since I and Suzy Homemaker attended the weekend Amitabha empowerment and teachings retreat given by Mingyur Rinpoche. How did this happen? The honchos at the Yoni School relented and let us roam free for a weekend. Spiritual teachings? Meditating? Chanting? "Well," they said, "Anything to raise the moral and spiritual level of our inmates...Maybe they'll start to shape up and integrate themselves into proper grammatical society..."

I'm sure they did not suspect that what Mingyur Rinpoche was teaching us was a technique designed to free us forever from grammatical society and samsara generally -- a practice known as Phowa, or Transference of Consciousness at the time of death. Phowa practice aims at propelling one's consciousness into Buddha Amitabha's Western Pure Land, also known as Sukhavati or Dewachen, where the birds sing Dharma, the rocks are precious jewels, the whisper of the trees in the breeze is the sound of the Buddha, the Buddhas and bodhisattvas expound Dharma all day long, and the cloudless sky rains nothing but bliss. I won't say much about Phowa practice. If you want to know more, here's a website I found. I will say this, though. It's a mighty powerful practice. I've done it now a few times, and without even getting all the visualizations correct or clear, I still experienced the effects, most noticeably a strong tingling and sensitivity at the crown of my head...where the central channel ends. They say that one of the signs of having practised well is that this area becomes soft enough to insert a strand of kusha grass into it.

Amitabha's Pure Land is said to be one of the easiest to reach. (Mingyur Rinpoche said, "How do you get there? Just head west..." He also said, in Tibetan culture "West" connotes cessation, while "East" implies beginnings.) It's one of the easiest mainly because Amitabha wanted it that way. Before he achieved Buddhahood, he formed the aspiration to create a pure land with many good qualities. In fact, all the good qualities of other pure lands. And he wanted it to be a place of rest and refuge, an easy place to be reborn, especially for those who have only just entered the Path.

Therefore, Amitabha wanted his Pure Land to have few entry requirements. There are only four requirements: 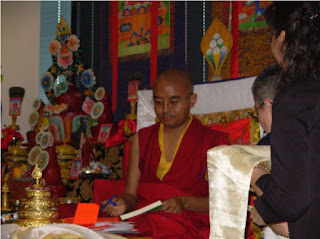 Simple, eh? Of course, the more you do Amitabha practice and the greater your devotion, the more likely you are to reach Dewachen at the time of death, because it will be present and familiar in your mind . It's worth noting that one of the main Chinese Buddhist schools is Pure Land school, where the main practice is the recitation of Amitabha's name. 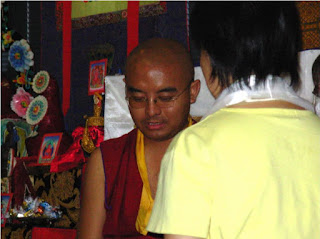 I've received teachings from Mingyur Rinpoche three times now. And it always fills me with joy and gratitude for having been exposed to the Dharma. Rinpoche's English is good enough now that he doesn't use a translator anymore. And his warm sense of humour always shines through the usual Tibetan formality. He's currently on tour around the world promoting his new book, The Joy of Living.

"where the birds sing Dharma, the rocks are precious jewels, the whisper of the trees in the breeze is the sound of the Buddha, the Buddhas and bodhisattvas expound Dharma all day long, and the cloudless sky rains nothing but bliss."

The dead girl book that I wrote and am now re-writing - where one of the characters she meets in the afterlife is Buddha - that description might be useful for thinking of Baddha's vision of paradise... or nirvana...