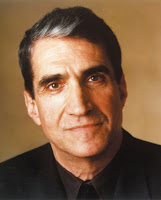 Charles Simic has made it to the top of the potic heap, appointed Poet Laureate in the US. I don't know much about him, only the name. Here's a link for info and poems of his. And here's the NY Times telling us all about it.

I don't know much about his po-tree. I'm a little more familiar with Robert Pinsky, who preceded him and appears now on the right side of the page.


And who is the Canajun Poet Laureate? Hmm...that seems to be a complicated question.

Is it this man? 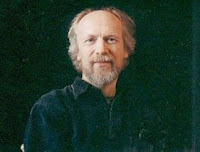 His name is John Steffler and he's the Parliamentary Poet Laureate. Whatever that is.

Is it this woman?

Her name is Pauline Michel and she was the Parliamentary Poet Laureate before John Steffler. Her term ended in Nov/06

Turns out the question is not so complicated after all. This man, George Bowering, was the first Parliamentary Poet Laureate, whose term ended in 2004. And who wouldn't choose a man who has the Peace Tower growing out of his shoulder? 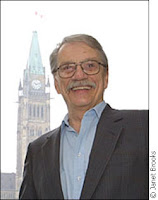 Naturally it was in the last place I looked, but the article about George Bowering indicates that Canada's Poet Laureate is in fact called the Parliamentary Poet Laureate. I didn't know that. But then, what I don't know could fill a good-sized blog.

For example, I've never heard of Pauline Michel or John Steffler. Are they good potes? Dunno. Who'm I to judge? I'm just a street pote, locked up for misspelling and general surliness. I have several what I call "shopping list" pomes. People seem to like them. I've never been in the Parliament buildings. 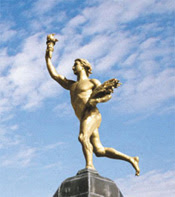 I have, however, visited the Golden Boy who faces

west from the top of the Ledge in Winterpeg. And they have buffaloes in the foyer! Or perhaps they're bison. There used to be also a statue of Louis Riel naked somewhere on the grounds, but they might have moved that. 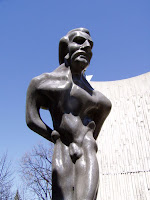 Yes, in fact it's now located at Collège universitaire de Saint-Boniface, which is in ze French Quarter of ze city. Lovely place. In a Manitoba sort of way. (This photo above reproduced under the GNU Free Documentation License.)

You see, they put me in the Yoni School for Wayward Poets partly because I have trouble being serious about serious po-tree. You know, Po-tree with a capital P. I read Robert Pinsky's book, The Sounds of Poetry...from back to front. It made just as much sense to me as the other way around.

Is it a good thing to have a Parliamentary Poet Laureate? Dunno. Seems to me whenever you get Parliaments involved it's a taxing experience. But I heard George Bowering often on Mothercorp, so I guess that's good. Anything to raise the moral, ethical, spelling and potic standards of the Canajun peeples. And, you can actually apply for the job. So that's at least one person who makes a living off of po-tree. Even if it's at the expense of Canajun taxpayers who apparently prefer hockeyhockeyhockey. (Don't get me wrong. I like hockey fully as much as the next Canajun kid who once caught a puck with his mouth...)

On the other hand, serious potes always seem to have universities attached to them. Helluva thing to drag around, don't you think? Much better just to have a dog. Dogs always love you, especially if you feed them. They're not quite as heavy as universities. And they're almost as good as having tenure.

The Parliamentary Poet Laureate's tenure is apparently two years. A dog can live 15 or 18 if you treat it right and take it to the vet for its shots.

I wonder if Parliament would consider creating the post of Parliamentary Dog Laureate? A husky, that's the ticket! A team of huskies! And a sled! To pull the Poet Laureate around the Great White North! I think I'll send my MP an email...

Maybe I'll even apply for the job.

Larry, you'e a Leo - you have birthday coming up, or you're in the midst of a birthday. So then, happy birthday....