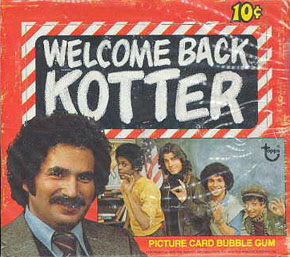 No, I don't mean I'm dating myself. That would be a blind date. I mean I'm giving away my age. In fact, I'll give it away to anyone who wants it.

I love starting off posts with blather. I'm sure you can tell. If I were going on a blind date, dating myself, I'm sure I would not tell. I would not kiss and tell.

But enough of that. Why is Kotter on the front page? Because of this piece he wrote for the LA Times. I copied it. I know I'm not supposed to copy it. It's copyrighted. But it's the only way I can think of to get the whole piece in one piece. So I've provided a link to the real piece. I don't know how long these newspaper links stay active. NY Times seems to be about 2 weeks. LA Times longer, but not forever.

Why am I putting this here? Because it's so absurd. Because when we Westerners wonder why, perhaps, so many parts of the world think of us as decadent, spoiled, not to say evil, all we need to do is look at some of what Gabe Kaplan tells us here. Absurd. And some people are so wrapped in their absurdity they can't step back far enough to notice it. Others, like the Sioux City pooh-bahs mentioned by Kaplan, possibly recognize the nuttiness and have decided to revel in it. Which I think is a reasonably sane response.

But then you suddenly discover that Kaplan has gone from being star of a 70s TV sitcom to erstwhile Celebrity Boxer to, actually, a professional poker stud. People are strange. Life is absurd. Samsara is a never-ending carnival.

Enjoy the piece. And the theme song.


From the Los Angeles Times

You'll let me do what?
The former 'Kotter' star pushes the envelope on how far his erstwhile celebrity can take him.
By Gabe Kaplan

Several years ago, I received an e-mail asking me to fight on an episode of a show called "Celebrity Boxing."

For $35,000, theywanted me to climb into the ring and try to pummel another overweight, 60ish, D-list celebrity. The e-mail went on about how much fun I would have (even though I soon learned that my former colleague, actor Ron Palillo, had broken his nose and suffered with body bruises for weeks after the previous show).

Ron had been matched against Dustin Diamond (Horshack vs. Screech). Although one guy was 30 years younger and 40 pounds heavier than the other, the fight still got sanctioned by the erstwhile Celebrity Boxing Commission. Now, it seemed, the producers were having difficulty finding anyone to participate in their third episode, so they came to me to see if I'd be willing to humiliate myself for money.

I sat at my computer for a while after I received this message. For some reason, I didn't feel like politely declining. Instead, I wanted to subtly tell these people what I thought of their show. What was the downside -- hurting my career?

So I started my e-mail by saying how thrilled I was to be asked and that, in fact, I boxed frequently. But I told them that in the years since "Welcome Back, Kotter," I had become a Hasidic Jew and would have to fight wearing a skullcap and tzitzit. (A tzitzit is a body prayer shawl worn under a shirt so that only the fringes are visible.) I wrote that I would be happy to "Pow! Sock!" 70-year old Adam (Batman) West or 80-year-old, former "Diff'rent Strokes" star Conrad Bain. And, I wrote, I could save the network money on expenses, as I always traveled with my own trainer and cut man.

I also requested a press conference before the fight so my opponent and I could hype the match by trash-talking each other. We would be physically separated after inflicting minor wounds.

I hit "send." Needless to say, I didn't expect to hear from them again. So I was quite surprised when I quickly got an answer addressing each demand point by point. They said "yes" to the skullcap and to my own corner men, and "no" to the tzitzit, the press conference and West and Bain. When I realized they were completely serious, I couldn't resist continuing the exchange. So I fired back, stating that I'd be willing to agree to a different opponent, and that no staged press conference was OK -- but that no tzitzit was a deal breaker. I felt like I was in an early Woody Allen film. How far could I go with this?

Having done it once, I couldn't stop myself. Over the next few weeks, and then months, I sent out some more weird e-mails just to see what would happen -- and I found that everyone took what I wrote at face value, no matter how absurd the premise.

The Postmaster General's office, for instance, thought I was serious when I suggested I should be the first living person to grace a U.S. postage stamp. A reputable book publisher, who had published books on the edge of the sexual revolution, agreed to publish my claims to have slept with more than 20,000 women, thereby breaking Wilt Chamberlain's legendary record. Harlequin would consider using my picture for the cover of a novel about a May-December romance. And Sioux City, Iowa, would definitely throw a 60th birthday parade for me featuring floats and plenty of hoopla.

I wrote to the Presque Isle Forum (a 5,000-seat arena in Maine similar to the Forum in L.A.) saying that I would love to debut my new act -- Gabe Kaplan and the Pips (including Bubba Knight and the rest of the original Pips). But I got back a note saying that the Forum only did ice shows from October to March. I responded that "this is an amazing coincidence" because I also wanted to do a show called "Doo-Wop on Ice," in which Gabe Kaplan and the Pips, along with other vintage rock groups, would sing, tell jokes and do some hot-dog skating moves.

No matter how hard I tried, I couldn't seem to push the envelope too far. Checking my in-box every morning became an adventure. Eventually, I decided to put the best of the e-mails together into a book, which meant that I had to re-contact my pen pals and ask for permission to use their words. Not only did most of them agree, but when I called the Sioux City pooh-bahs to say it had all been a joke, they still wanted to throw the parade for me anyway. So in June, we had the Gabe Kaplan birthday parade in Sioux City featuring floats and plenty of hoopla.

Gabe Kaplan played Kotter in the 1970s sitcom "Welcome Back, Kotter." He is the author of "Kotter's Back: E-mails From a Faded Celebrity to a Bewildered World."

PS. Musical Trivia: 08/06/07: Speaking of dating myself, the singer of the theme song is John B. Sebastian, who was the lead singer of the 60s band, Lovin' Spoonful. Remember Summer in the City? I recall seeing him in some video playing an autoharp.