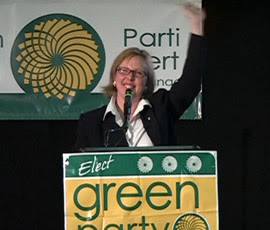 Why is this woman waving? It seems that Elizabeth MayorMaynot face opposition in her chosen riding at the next federal selection. M. Dion & the Outremonts has agreed not to run a Gliberal candidate against her cuz she's the leader of the Particoloured Parti Vert. And MayorMaynot may not run a candidate against him neither nor. Separately, they would like to work together in the next Parliament, where M. Dion & the Outremonts expects to be Prime Mystery. Apparently they both have this thing about The Environment. I guess they'd like to have one.

However, MayorMaynot has chosen to run in Central Nova, which is in Nova Scotia, and it's a strong Constipated riding, currently held by Peter 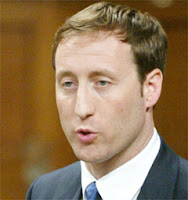 Decay, (seen here whistling in the dark) who is the Mystery of Foreign Affairs and also Failed Affairs. (See previous post...and photo below) She'll need a lot of votes to catch up to him. She has one thing going for her though. No one's quite sure if Prime Mystery Stephen Harpie and Peter Decay are interested in having An Environment. So, people who breathe and drink water are a little nervous about them. The Army likes 'em though cuz they plan to buy a bunch of tanks. Elizabeth MayorMaynot definitely wants An Environment. People who breathe and drink water like that.

My take on it is this: Peter Decay should lose. He's been working at it ever since he became Foreign Affairs Mystery. It's a mystery how he manages to avoid being mistaken for the doorman at the Notell Motel. He's a lightweight. A cipher. He lacks the gravitas necessary to pull his weight in the international arena. He has mishandled several major issues. (Like the Mystery of the Murder in Mexico.) He wears gumboots. (Don't get me wrong, I love gumboots, but they don't belong in the House of Common Bawdy Houses....I can't believe I just wrote that! That's exactly where gumboots belong, since you have to wade through so much, uh, uno there.)

OK, and last but not least, the photo of his shining moment as Mystery of Failed Affairs: 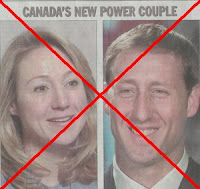 Now, there is one other thing. I think I've posted on this before, but I'm too lazy to look in the archives. The Particoloured Parti Vert has a petition going to have Elizabeth MayorMaynot included in the televised debates. Up to now she's been excluded. Well, OK, she's been excluded because there hasn't been a televised debate since she was elected leader of the party. But you know what I mean. The Particoloured Parti Vert has been excluded. Cuz they ain't got no seats in the House. But they got a pretty good number of votes across the country, and they have a legit message and platform and planks and the whole edifice of an actual party, and they run candidates in all the ridings (except the one where M. Dion & the Outremonts runs, I guess) and the reporters listen to what they say, sort of, and you see their whirling dervish spinning wheel signs everywhere, so why shouldn't they get to participate in the crummy televised debate? If you're interested in signing the petition, go here.