A Buddhist View of the Crucifixion

The Tibetan Buddhist tradition has a powerful teaching called The Seven Points of Mind Training which, if practised diligently is said to encompass the entire path to Buddhahood.

The centrepiece of the Seven Points is a practice called Tonglen. The simplest way to describe this practice is to say that one visualizes all sentient beings, breathes in their sufferings in the form of thick black smoke and breathes out light which relieves them of suffering and brings them whatever they need and desire most in whatever form is most beneficial.

And as I write this, I see that it doesn't even begin to convey the power of the practice, or its nuances, or even its essence. So I'll have to give a bit more detail. 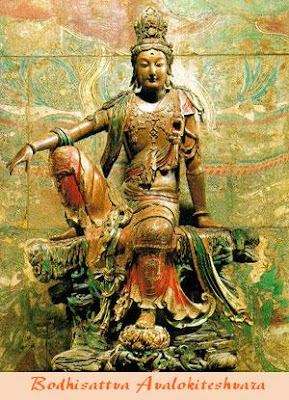 The man who wrote the root text, Geshe Chekawa, opens with homage to Great Compassion. The Bodhisattva Avalokiteshvara. In Tibetan, Chenresig. One of the goals of Tonglen is to open our hearts to the sufferings of others, to the point where our sense of compassion becomes unbearable, so that we see that we must do something to relieve this suffering. This is the motivation of the Bodhisattva. The prayer that the Bodhisattva makes is: May all their sufferings ripen upon me, and may all my merits ripen upon them.

You don't even have to start with all sentient beings. You can start with yourself and the suffering and problems you will experience throughout the day. Or you can focus on a specific friend or family member. It becomes a little more difficult when you choose someone you think of as an enemy. The point is, no one is excluded.

To give you a more concrete picture: you visualize someone in front of you and see their suffering, whatever that may be...cancer, the loss of a loved one, AIDS, extreme poverty. (I often think of someone I know who is suffering through some difficulty the same as one I am suffering. It's very easy to relate to their suffering then.) You look deeply and see this suffering inside of them and around them as a cloud of thick black smoke, the kind of smoke that results from the worst fire of toxic substances. Or you think of the kind of filth and muck that you might find in a septic tank. And you want to free them from this suffering, so you breathe that smoke in. All of it. The smoke and filth travels down your central channel to your heart chakra.

Now, at your heart is a tiny diamond-hard rock, black in colour also. That rock represents you, your ego, the greatest delusion you have...your self-grasping and your self-cherishing. Self-grasping refers to the idea that there is something solid and eternal which is "me", that this never changes and never disappears. It is the primary delusion. Self-cherishing is the result of this...the idea that "I" am far more important than anyone or anything else.

When the black smoke touches that black kernel, the kernel explodes. It vaporizes, as if it was struck by a nuclear bomb. So, what that breathing in of black smoke does is destroy our conception of ourselves as inherently existent, while at the same time making us fully aware of the endless suffering of sentient beings. It opens us up to the possibility, even the necessity of helping other beings in whatever way we can. And it softens our hearts by removing that diamond-hard rock of ego.

On the out-breath, you send light to the being or beings in front of you. They experience immediate relief from whatever suffering they have. You can see their relief and joy. Whatever it is they need -- comfort, healing, a loaf of bread -- the light you breathe out gives it to them. And you give thanks that you are able to help them in this way.

In one sense, this practice is difficult to do. Taking on all the sufferings of everyone? Forget it! In a teaching by the Dalai Lama, a woman in the audience says she is very afraid to do this sort of thing. The Dalai Lama responds by saying that if she were really taking on the suffering of others, that would be quite remarkable. But of course, we're only visualizing this. This is still most important, though, because as Buddhists we know that our minds are a form of energy, so the light that we visualize is also a form of energy reaching out to blend with the energies of countless other minds. All of us are familiar with the power of thought. Even so, (and not to frighten anyone), we are also practising, preparing for that time when we will be advanced enough to actually offer our own bodies to help relieve others.

Which brings us to the crucifixion.

The usual Christian intepretation of the crucifixion is one of atonement. Christ allowed himself to be crucified in order to atone for the sins of the world. He assumed responsibility for all the evil we commit, have committed and will commit. By becoming the sacrificial lamb, he paid our debt to God. That's why the lamb is the symbol of Easter. (Not the Easter bunny, no no no.) 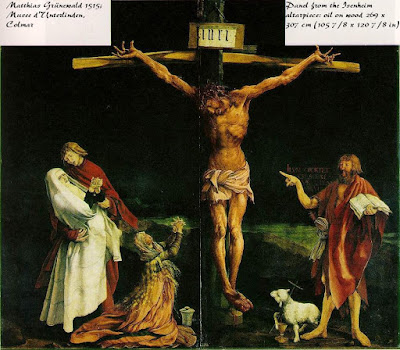 Buddhists do not generally think in terms of sin. You read the word occasionally, but what it usually means is a negative action which will produce negative karmic consequences. For Buddhists, there is no absolute evil, no Satan. There are beings who perform evil or negative deeds out of delusion. Satan was/is a marvellous angel who suffered from the delusion of pride. And unlike the approach of our secular and modern closed-mindedness, for example with respect to sex offenders, no one is incurable...in the long run. And Buddhists have a very long run...beginningless and endless. It's just that some cases are more difficult than others. But even Satan, whose other name Lucifer provides the hint, can at some point recover his place in the clear light.

But let's let go of the concept of atonement for a moment. What if Christ was actually performing the ultimate practice of Tonglen? What if he was assuming the sufferings of sentient beings in reality rather than in meditation as we do in our Tonglen practice? This sheds an entirely different light on the crucifixion. Perhaps Christ was not paying a debt, but rather taking on, out of his limitless compassion, the sufferings of all mankind, the crazy delusions, the pettiness, the hatred...and wishing us ultimate peace...the end of suffering, the end of delusion, the end of hatred. And he was showing us how it's done. By caring for the benefit of others before oneself. Even at the cost of his own life. That's the bodhisattva vow.

For Buddhists, Christ is not the saviour. But we may say that he is a saviour. He is a bodhisattva. A powerful bodhisattva. We know that Christ was a model of compassion. The Sermon on the Mount is most profound in that respect. And when he said, "Suffer the little children to come unto me," he was recognizing the purity inherent in all of us, if we could only become again as little children. We know that he could be angry, but that he knew how to use his wrath in effective ways...as teaching moments. When he said, "Render unto Caesar..." he was telling us that he upheld the Law. Another translation of the word "dharma" is "law". 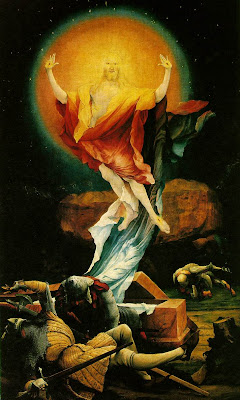 At one point, while on the cross, Jesus cried out, "My God, my God, why hast thou forsaken me?" Me, he says. Perhaps this is doubt creeping in, just as in the example of the woman at the Dalai Lama's teaching. Don't forget,the ego is a diamond-hard rock. It does not surrender easily But when he died, his words were, "I commend my soul unto thee..." because he saw reality as it was. He rejoined his father. He reconnected with the light. And of course, he didn't die, because no one ever really does. He was resurrected or, in Buddhist terms, enlightened. The depictions of Christ after his resurrection always show him surrounded by light. I would venture to say that's because deep in our psyches, we know that the clear light is our best representation of ultimate reality, and we recognize that Christ achieved that pinnacle.

Marvelous post Larry. And highly instructive for those less familiar with the finer points of the vast world of Buddhism. I really don't think I have anything to add, so all-encompassing was your post...