As I said in an earlier posting, I was tagged by Camille Crawford to participate in the Gotta Get Goals meme initiated by Alex Shalman. I do believe this is the original graphic from Alex Shalman's blog, in which he challenged denizens of the international blogomat to list their goals and link back to him so he could compile results. I agreed to do this, but it's taken some time to get my act together. But finally, I'm ready. I include this graphic here because it's related in a way to one of the goals described below.

For starters, I think it's fair to say I'm not really a goal-oriented person. Maybe that's a flaw. I can tell you that it has contributed to a certain sense of drift throughout the course of my life, to the point that I have not accomplished all I am capable of. But I have noticed that if I write things down, for example on a ToDo list, I tend ToDo them. Otherwise they get shuffled around and sometimes shuffled right off the agenda. So a nudge from Camille is a good thing.

As I thought about these goals it became apparent that some are short or medium-term. Others are more long term, almost wishful-thinking. I don't think any of them are "wildest dreams over the top" as Alex suggests. But some are definitely more...metaphysical, let's say.

So here are the more immediate goals:

1. Finish and promote my CD of spoken word & music, called Wordsong. This is a combination of poetry and some prose set to music that I've composed. Much of it is done, but there are loose ends.

2. Publish the book of poetry I've been working on for some time.

3. Two novels are in the works. One is Larry Keiler: The Unauthorized Autobiography, pieces of which you can read here. The other is one in which Pablo Picasso is the central character. Both of these are unfinished. I let them go for a long time, for reasons I won't go into here, but I feel as if I'm getting close to being ready to tackle them again. Writing this blog plays a part in that.

All of the above are things I expect to be wildly popular and successful
thanks to the support of all you bloggers and blogettes out there.

4. Learn more about website design, website construction, you know, like code & style sheets & all that, including how to make graphics like the one in Alex's blog, so that at some point in the near future I really can be master of my domain.

5. Improve and deepen my relationship with my partner, Suzy Homemaker.

And now for the longer-term goals:

5. I'm not really a wealth-seeking kind of person. I just need enough, that's all. Having said that, though, how fantastic it would be to have the wealth of Bill Gates. How fantastic to have one-fiftieth the wealth of Bill Gates. But, as a Buddhist person, I can only think of one reason to have that much money, and that is to use it for the benefit of others. What else? I can only drive one car at a time. I can only live in one place at a time. I can only sit in one hot tub until my skin gets wrinkly. In fact, if I were as wealthy as Bill Gates, I wouldn't need to own anything (except for whatever it is that brings in that wealth.) I could afford to be homeless. I could afford to be without a car, a plane, a boat. I could afford to support the Dharma and the spread of Buddha's teachings, and the lives of dedicated Buddhists everywhere. I could build temples, stupas, universities, monasteries, retreat centres. Call that a goal. One of my wildest ones. 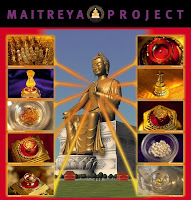 The Dharma, for that matter any religious movement, has always depended on the support of wealthy patrons. The Buddha received support from many rich people, including kings. The park where the Buddha spent a good portion of every year was donated to him and his followers by a fabulously wealthy man named Anathapindika. Lama Zopa Rinpoche has a project to build a statue of Maitreya, the future Buddha, the largest statue in the world. I'd like to be able to pull the cheque out of my pocket that pays for the whole thing.

6. To fulfill what are called in Tibetan Buddhism The Four Immeasurables:

How wonderful it would be if all sentient beings had happiness and the cause of happiness!
May they have happiness and its cause!
I shall cause them to have these!
Please, guru-Buddha, grant me blessings to be able to do this.

7. To achieve Buddhahood. (Not too ambitious for someone who's not too ambitious, eh?) Ever since I was quite young, I've believed in the perfectibility of the human race, if not in the physical sense, then in the metaphysical. I've felt that mankind could evolve or develop into perfection, something akin to god. Buddhism holds out that promise for me.

That's it. That's all for now. Except that since we're playing tag, I think I'm supposed to suggest this idea to someone else. So, if they are willing to play along, here are two:

John Gillespie at Sensitivity to Things

Awannabe at The Missing Blog Meets the Big Bad World

Thanks Camille. I knew you would. :) I think Suzy will too.

Oh oh oh! OK. You see why I'm not fabulously rich. A little slow in the counting department...among others.

Now, the question is, should I edit?

Okay Larry, I will probably Thursday. I was doing a friends genealogy tonight. I got 3 generations back from her grandfather on one line, and back to 1570 on another line in her family. Exciting (and addicting) stuff. I think I need to link your blog to my site so I remember to visit you more often.

Suzy likes goal #5 too and she would like to discuss it with you!

My advice would have been to leave it perfectly as it is, was, and meant to be!

I think I've just been tagged!

Gosh, goals... that sounds kind of serious. O.k., since this officially makes two tags (thanks also to Camile I am going to have to hereby promise to go get myself some.

Here's a small one for starters: I will get around to writing about your Buddhist Interpretation of the Crucification on my blog—as I have been meaning to for two weeks now.

Well done on your goals by the way—they all sound very worthy and well worth emulating.

John, my reaction exactly...serious stuff. Great thing about goals is, you can change them.