Hitch Hiker's Guide to the Galaxy

Don't Panic! Yes I know it's been several days since the last post. The computer has been in sick bay. I myself have been lying around the corridors of the Yoni School moaning and shivering, suffering from Mental Blog. Withdrawal from blogposting may not be as difficult as getting off crack, or heroin, or even alcohol. No DTs. No lizards crawling the walls. But even so, there were scary moments, moments when I experienced horrific delusions of grandeur, believing that the universe out there was sorely missing my gems of wit and wisdom.

And this is a pretty good segue into the subject of this post, because reading The Hitch Hiker's Guide to the Galaxy is a bit like tripping on acid, something I'm sure Douglas Adams must have done.

I spent my computerless days reading the Guide. The cover pictured here is not the same edition as the one I read. The one I read belongs to Suzy Homemaker. She bought it many years ago, presumably in a fit of existential frivolity. 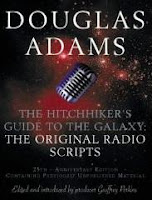 The closest cover I could discover (without wading through dozens of Google pages) was this one, which depicts the radio scripts. Suzy's is not the radio scripts. It's the edition (probably the first version) called The Hitch Hiker's Guide to the Galaxy: A Trilogy in Four Parts. Suzy's doesn't have the old-fashioned microphone on the cover, but the picture is similar.

So, what about it? The Hitch Hiker's Guide is Monty Python on paper, covering the inner edges of outer space and the outer edges of inner space.

I laughed out loud exactly five times. This may not seem like much, but think about it. How often do you actually laugh out loud when you're reading something silently, alone, in a detention cell for wayward poets where you have to go far away in a concrete bunker to have a smoke? So five times is pretty good. About once every one hundred pages. And this is not even mentioning the numerous times I chuckled.

But here's the thing. Every time I laughed it was because Adams came up with something so out of left field, or so astonishingly clever, that I couldn't help myself. Which, for the most part is not the way Adams writes. If he has a flaw, it's that he pursues perversity and contradiction and silliness so intently that it becomes predictable. He states the obvious so often that eventually you come to recognize the parts you can skip. (But you do this at your peril, because he just might slip in something you need to know...) And...oh yes...he uses far too many adjectives...he interrupts himself...he employs subordinate clauses as if they were indentured servants with no prospect of ever buying their freedom.

Which makes for difficult reading sometimes. I would get exasperated and wonder, "How in the world did he ever get this past an editor?" And then I realized that I often write in exactly the same way, with asides and digressions and non sequiturs and inside jokes and godknowswhatelse.

So, I am either constrained to change my wayward ways...or forgive Adams his unrestrained waywardness.

I must say, he has become rather rich.

All it takes is one good hit with legs.

He was rich. He died on May 11, 2001. He actually wrote for at least one episode in the final season of Monty Python. He was greatly influenced by P.G. Wodehouse. You might also check out Woody Allen's early fiction.

Thanks, Gregory. I didn't know that. I can only assume he succumbed to demolition to make way for an inter-galactic bypass. At least he avoided the detour western society has taken since 9/11.

And thanks for the suggestion about Woody Allen.

He died exercising in a gym. No joke.

What a great blog you have - and not just saying this coz I don't have anything bright and witty to write and stun you with my brilliance but I did actually thoroughly enjoyed mine intergalactic visit to your planet of crazy;)

Thanks for the compliment. It's encouraging to see other people reading your stuff...and even commenting! Doesn't feel so much like the Blogovoid then, eh?