The Ministry of Unformation
Today in a startling facsimile of a press conference, Altered Ego Larry Keiler proposed the establishment of a new government department to be known as the Ministry of Unformation. When asked why he thought this was necessary, Mr. Keiler replied, "I really don't want to elaborate too much on that since the matter is before the tennis courts. However, if Vice President Cheney would like to take a shot..."

Several reporters were curious to know who Mr. Keiler thought might make a good Minister of Unformation. In response, Mr. Keiler held up this picture: 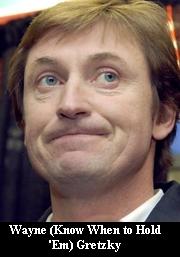 Asked why he thought Mr. Gretzky should be appointed immediately to the Sinate, Mr. Keiler provided several pertinent quotes from Mr. Gretzky's Feb. 13/06 confabrication with the media:

Mr. Keiler commented that Mr. Gretzky proved beyond a shadow of a doubt how much he could not accomplish in 4 and 1/2 minutes.
Posted by Larry Keiler at 10:31 PM

Larry will post his own comment on his slag against Wayne. Larry thinks (before the evidence is even all in) that Wayne Gretzky is not involved, no story, (except maybe for something related to his wife) and that he's just too honest a guy. Larry believes Wayne. Larry believes in Wayne. Larry likes Wayne. They were good buds (in some other reality). However, Larry really wasn't too impressed with the press conference.

So what should you do with a pack of wild pigs in hot pursuit, going for your reputation, trying to drag you, wallow with them, in the slimy mud? Any reaction would hand them a new weapon. I guess those are the risks of being worshipped as a (hocky) god.

Yeah, it's a tough question. I don't know exactly how, but somehow to acknowledge that the focus of reporters' interest was not hockey but the controversy surrounding him. Stonewalling only makes them frustrated and less likely to let it lie. As with any public figure, esp. politicians, my question is: what's the point of holding or calling a press conference if all you're willing to provide is unformation?

That's true. I somehow didn't pick up on the fact that Wayne himself called the conference. I thought they were just "Papperageing" him. Oh boy, no clue how to spell that. You know that gang of reporters that was on Diana's heels all the time.

Why are people made into idols to be worshipped? Why, from then on do they have to be absolutely perfect, not human anymore with all the human failures anybody else gets away with?

This is part of the problem with Wayne. Up to now he has been perfect. Nothing's really touched him. Everyone's been on his side, and the last few months have not been easy. And the years before that when his father had the stroke.

Myself, I don't think the reporters are on him really to topple him off his pedestal. They're on his side too. But it's a story...they're excited, they want to know what's going on. And a lot of other people do too.

Not that I'll ever have to worry about it, but I think if you reach idol status, then the best thing to do is make a conscious effort and choice to be as much yourself as possible, with all the warts and everything so that people can see you're fallible and human and just like them. Be as ordinary as you can. This is the Tao. Humble. Do not seek the limelight. When you're exceptionally talented like Wayne, the limelight will find you.

BB & I were thinking that the whole thing erupted right prior to the Olympics so that the Americans would have a better shot of beating the Canucks and winning the Gold medal in hockey - hey, a conpiracy...

Part of me says, hey, the bigger problem is why a woman who has so much needs to bet half a million dollars on sports events. And why wouldn't family members know. I guess some people just have too much money.

Yep, Wayne's had it hard lately, with the death of his mother and grandmother. We each have our own row to hoe, or rink to ice...

As for the Olympics in general, hell, it's all about stories and hype anyway... we love stories. The drama. The highs and lows. The Cinderella stories, and the underdog stories, and the overcoming adversity stories, and even the scumbag stories.

DT, your second paragraph describes precisely the thoughts I've had all week, although I didn't write about it. Far as I can see, this is where the Great One is vulnerable. No suggestion that he was involved, none that he's gambling. Yet, perhaps he's complicit through his wife...

And half a million dollars? Yeah, well...some people do have more money than they know what to do with. Probably for them (her) a betting that much is like us laying down five bucks for 649.

But if the limelight finds you you're in it just the same, whether you seeketed it or not. How's that different?

Why is Wayne and the team in the Olympics? I thought you had to be amateur for that.

Gambling or no, he IS a proffesional.

I guess I am way behind qua info huh? It was two years before it dawned upon me that there were no paper dollars in circulation anymore.

Dunno why, but your comment took a long time to show up on my computer.

You are so funny somethimes wt. (FYI, there are no paper 2 dollars anymore either...)

Olympic rules about amateurs were changed quite a long time ago now. Next thing, they'll be changing the rules about doping cuz ya can't really control it either. Olympics will be a show for professional drug addicts.

See the tears on my face? You think I am funny! "Show for proffesional drug addicts!" It's so right on, I can't stop laughing. I wonder what Zeus, the overseer of Mount Olympus thinks of all that. Bet he is not dead, but slumbering somewhere like in the West, like King Arthur. The Olympic flame he must see as just a shadow of his mighty thunderbolts. 'fcourse Zeus was no angel either. But then again, angels are no cherubims on wings. They're probably more like flaming swords protecting the tree of life.And the Angel of Light turned devil and may be on the side of the proffesional drug addicts. Maybe he created them. I bet you a two dollar bill he did.

Coming back to archives. I see no word archives to click on. But there is the left side of the screen listings of the names of the blogs from the most recent down to previous ones. Those are the ones I mentioned to BB for back checking. It's like a tree that grows more and more branches and it gets harder to remember which leaves (comments) are on what branch.

Suddenly popped into my head, "come to think of it, I've never heard a women's libber complain about the devil being considered a he/him/male."

Yes, I see what you mean. You have to be on the home page, so click on Home down here at the bottom. Then, on the left side you see Recent Postings, Archives, and Links.

Angels. Fearsome creatures, yes. Awful, in the real sense of the word. Too bright to look at, like the sun at mid-day. Both wrathful and serene. A word just popped into my head: Elohim. Do you recognize this?

Wow, yes, you get me going. I have so many notes I wrote, and books I read on these subjects. But also it is stacked away in drawers. I quickly dove in and leaved through some stuff. And got caught and am dying now to go back into it. I found some old poems, all to do with Jungian stuff , religion, Jesus , buddah, kabalah, eastern, western philosophy...

I need to do something with it.

Anyhow, Elohim. I remember, Saraphim, Elohim, and Ohpanim. All orders of angels. Kaballah philosophers meditate on different aspects to reach higher conciousness. I have no details in my head about the first two. But Ophanim is the highest and an untrained soul, opening the gate to it, may not be able to return. It reads,

"Open another gate and enter the world of disembodied sound where soft beating of wings announces that you reached the realm of Ohanim , angelic beings in the shape of wheels.

Isaac Asimov wrote a childrens book based on that, called "The Heavenly Host." It's about scientists that travel space and colonise other planets. They are only allowed to do so when they can proof that there is no intelligent life present. A boy is with his Mother, one of the scientists, on such a planet. They are about to claim that there is no intelligent life. But the boy meets with a child inhabitant, a wheel. They learn to understand each other. Vibrating colours is the wheels way of communicating. The wheel children when they come of age grow wings. It's Christmas. The boy and the wheel children come up with a plan. When the scientists celebrate Christmas, Earth's way, and have the books ready to sign, a lare amount of wheels come flying in and form a white angel over the Christmas tree. That they can do that proofs that they are intelligent.

Ofcourse the book I lost in the black hole that follows me around.
Never do I find what I want, instantly. Only when I am not looking for it.

I'll try out your Home Page suggestion now. Send this out first.

Yep, that worked. Thanks Larry. I learned something again.

Among the angels I forgot Cherubim, I believe the lowest order. I think I have them in the right order. After Cherubim it is Seraphim. I spelled that wrong in the above.

You know, long long ago, in another time and universe, when I was at univerity, I wrote my thesis on the archangel in Islam...

There is another ordering of angels...the archangels, the dominions, don't know what else. I think there are something like seven categories. DT, you should know this if you did your thesis on it.

And then there's us, eh? The ordinary angels.

I checked the web. The seven archangels are:

Michael "Who is God"
Gabriel "God is my strength"
Raphael "God heals"
Uriel the one who held the
firy sword at the lost
eden
Suragael Known as Holy Angel, also
as Angel of death
Raquel "Friend of God"
Camael "Who attends throne of God

Type in archangels and find the heading archangels. There is more info, with music even. I just gave the immediate info here.

dt, which was the archangel in Islam??? Could you tell something about that?