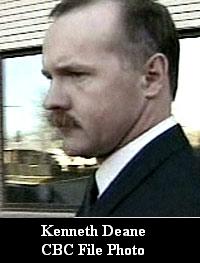 I was startled to hear today of the death of Kenneth Deane in a traffic accident on Sunday. Deane was the OPP sergeant who was convicted of criminal negligence causing death in the shooting of Dudley George at Ipperwash in 1995.

His death is rather untimely (or, some might say, fortuitous) since Deane was scheduled to appear at the Ipperwash inquiry in the next few days. Although I’m not convinced anything new would have come out of his testimony, since he’d already undergone a criminal prosecution, still there was a possibility that he might have become tired of being the sole fall guy in what turned out to be a tragic mismanagement of a native land claim. If so, maybe he would have blown the lid off what so far seems to have been tightly capped.

The inquiry (what I know of it) has been frustrating. No one is accepting any responsibility. (Reminds me of a movie I saw as a lad: Guide for the Married Man: in which one of the cardinal rules was, if you get caught cheating Deny Deny Deny.) Even former premier Mike Harass slimed his way through two days of testimony. His former henchman Bob Dunciman pointed a nasty finger at Harass and said that Mikey called them injuns effin injuns! This caused quite a stir in the press. As if the whole world doesn’t know that anybody at any time might call anybody an effin something or other. This was a red herring designed to inflame the passions of the masses without imparting any real information:

Ah-hah! Another case of UNFORMATION!

I’ve heard Peter Edwards, the man who wrote the book One Dead Indian, several times over the last few months discussing the progress of the testimony at the inquiry. Every time he’s spoken he’s said that the versions of the story told by various witnesses are so diametrically opposed that one cannot escape the conclusion that someone is lying. And it all depends on who is determined to be most credible. And the answer to that is another question: Who has the most to lose?

BTW, I couldn’t confirm this in the miniscule amount of research I did today, but I did hear on the radio that Deane is the third important witness to die before having the opportunity to testify at the Ipperwash inquiry.
Posted by Larry Keiler at 8:59 PM

I haven't followed this Ipperwash inquiry with intent. Hear bits & pieces. One of those was this morning, doing dishes, that a witness had died before he could testify, and I said out loud to myself, "Sounds like no coincidence...Didn't know then he was the THIRD important witness to die...

fortuitous....i would suspect his family wouldn't think so. no coincidence and for anyone who thinks so, you need to have your head examined.