Here are some images I borrowed from the Net. We've all seen them or ones like them. I hope the owners of the pictures don't mind...at least I give credit... 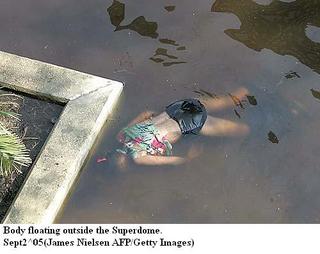 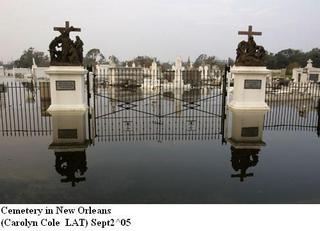 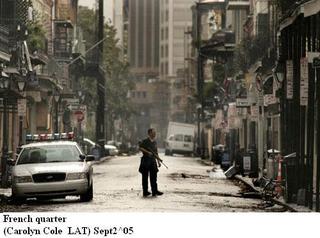 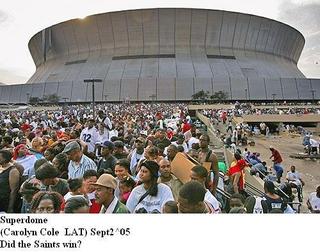 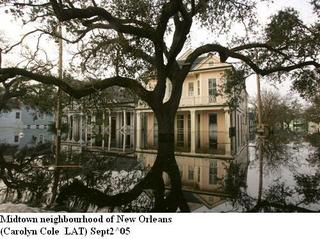 Over the last couple of days the chatterboxes on talk radio have been spouting off about how the military and the police should shoot to kill looters...(I didn't have an opportunity to listen to Rush Limbaugh this week, but I suspect he would have been one of the loudest...)

I can't make much of a comment about looting...most of these people were simply looking for food and water.

What I'm wondering is: given that everybody knew a major hurricane was going to hit; given that people were warned to leave New Orleans; why did the National Guard (or whoever) not arrive before the storm and evacuate all those people they must have known would be stranded in the city because they were too poor to own cars or buy a plane ticket or even a bus ticket? Why did the authorities just leave them there? Before the storm would have been the time to show up with guns and herd everybody out of town.

I hear murmurs of Katrina described as God's punishment. The sheer mean ignorance of that point of view used to drive me crazy with anger. When I catch snippets of that altitude from the religious south now, it just makes me feel very tired.

Well there's no doubt at all that New Orleans has been struck by the wrath of God. And her name is Katrina.

I've never been too fond of the theory that there is a god who micromanages our lives and gets pissed off when we don't do things right and so decides to finish us all off with a flood. Noah notwithstanding.

Yet, because of being a Buddhist, I can't escape the conclusion that the law of cause and effect is in action here, individually and collectively. I'm always left to wonder what karma put those people in that place at that time. It's extremely subtle and complex. Beyond me, or pretty much anyone not a Buddha.

And leave morality out of it. It's simply energy. The energy of thought. The energy of intention. It comes down to whether an action has a positive effect on one's mindstream, or a negative. Does it lead toward ultimate happiness or away? If, like Jean Valjean, you stole a loaf of bread because your children were starving, the morality of that is mixed, isn't it? But the karmic consequences are immutable. That is, there will be consequences.

Our collective karma means that we (every single sentient being) all "agreed" to set up reality the way it is. It also means that we can agree to alter it. But every time we perform an action, or acquiesce to an appearance, whether it be sight, sound, touch, taste, or smell, we reinforce the collective agreement to continue with reality just as it is. Or maybe better to say, to continue to perceive things just as we always have.

The consequence of human consumption is global warming. Whether this storm is a result of that or not, we don't know for sure.

The other thing is building a city basically below sea level on a coast with hurricanes. Basically as humans we take enormous risks with our planet. But this is a human deed (karma) and not a pissed off God.