Werds By The Pound Pt. III

Now here's a real horrorshow raskazz that I've owned for a good long raz. My appy polly loggies if you don't kopat my govoreeting, O my brothers and sisters. You will just have to kupet it and read it, or itty over to the biblio and borrow it. Have yourself a tass of the old moloko-plus while you are at it.

And that's about all I can manage of the Nadsat language, with which A Clockwork Orange is replete. From the very first page, you know you are in for it:

There was me, that is Alex, and my three droogs, that is Pete, Georgie, and Dim, Dim being really dim, and we sat in the Korova Milkbar making up our rassoodocks what to do with the evening, a flip dark chill winter bastard though dry. The Korova Milkbar was a milk-plus mesto, and you may, O my brothers, have forgotten what these mestos were like, things changing so skorry these days and everybody quick to forget, newspapers not being read much neither.

I'm oversimplifying, but in these days of lawn order politicians, minimum sentencing and so-called stiff penalties for every little thing, oversimplifying fits very well with the zeitgeist.

Alex and his droogs commit several heinous crimes, and then, because Alex was a little too trusting of his droogs and miscalculated their loyalty, he gets nabbed by the millicents and sentenced to prison. And eventually submits to an experimental treatment whereby he is rendered incapable of violence. The very thought makes him violently ill. As an unintended side-effect, the treatment also robs him of his only redeeming feature, the love of music.

And then he gets released. Within hours his negative karma catches up with him. He meets his old droogs and gets the crap kicked out of him. He takes refuge with a previous victim who then turns him over to some political types who use him for their own purposes. He gets thrown out of the house of his own pee & em. He attempts suicide.

The bleeding hearts get themselves in an uproar and force the government to restore him to his original condition, an ultra-violent lover of Beethoven.

In the end, Burgess offers an indictment of both sides. Beware the demagogues and simple-solution advocates. Things are not that simple. What was done to Alex was an outrage (even tho he more or less agreed to it.) Put as oversimply as possible, the state has no right to remove one's humanity (limited as that humanity might be.)

But the other end of it is just as unsatisfactory. In the end, Alex reverts to his original state:

Oh, it was gorgeosity and yumyumyum. When it came to the Scherzo [of Beethoven's glorious Ninth] I could viddy myself very clear running and running on like very light and mysterious nogas, carving the whole litso of the creeching world with my cut-throat britva. And there was the slow movement and the lovely last singing movement still to come. I was cured all right.

But jolly old England was not a safer place. 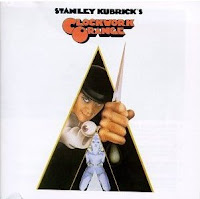 My copy of A Clockwork Orange doesn't quite predate the movie, but it does predate what later became the iconic images. I looked, but couldn't seem to find online an edition with a cover like the one above. So I scanned it and offer it to you. And in case you don't remember, here's what came out of the great success of the film:
Often when a book is made into a movie, the film doesn't quite live up to the book. That is not the case here. Stanley Kubrick crafted yet another masterpiece with A Clockwork Orange, and made Malcolm McDowell's career for him. Kubrick often managed to be ahead of the curve. In this case, among other things, the soundtrack by Wendy (then Walter) Carlos broke new ground with its use of electronic music. Electronic Beethoven what a concept!
Many years later I heard an interview with Wendy (previously Walter) Carlos, who described the incredibly painstaking process of creating this complex music with the (relatively) primitive, altho powerful, electronic instruments of the day, in particular the Moog.

Some of you may remember the early Moog synthesizers. They looked like telephone exchanges with a keyboard attached, and to change the sounds you had to plug things in here and put them over there and twiddle the dials, change the amplitude, the frequency, the wave form, and then unplug that so you could put it in this until the right sound came out, and then you had to get the notes right. Nowadays, sez HWSRN, you press one key and the arpeggiator does the work.

Hans had an album called, "Roll over Beethoven." Wasn't that electronic versions of his music, or was that just jazzed up?

Don't know. Electric Light Orchestra did a version of the song "Roll Over Beethoven" which included the opening phrase of Beethoven's Fifth, but that was more rock & roll than electronic.

See the think lines in my face? What I was remembering must not have been that song. I see it was done by Chuck Berry, Rolling Stones and the Beetles. What I was thinking about had no lyrics. And come to think of it, it may have been music of Bach reinvented Rock and Roll style. It worked too. Bach's music is so versatile. Of course Rock & Roll is plugged in music, but not the way you think about electronic waves now, I guess.

I am going to go over some cases with old casettes and see if I can come up with what exactly I was thinking about. I am curious now.

I'm flabbergasted. I have about a million cases with old cassettes. I opened the first one and instantly found what was looking for. I am that me that never ever finds what I am looking for, when I want it...

Anyhow,what I was confused with was indeed Bach, and well, "Switchen On Bach", performed by Walter Carlos and Benjamin Folkman.

The original album is under the C.B.S. label, the music classified as modern, classical and experimental, transcribed for the Moog synthesizer, programmed by Electronic Realizations,and(what do you know?)in the Netherlands.

I just ran to turn over the cassette. Amazing how used you get to long playing CD's. One side of a cassette is almost nothing. Good old Bach sounds good though, even electronically.

Roll over Beethoven I also have, I believe on a Beetle's album.