Werds By The Pound Pt. II 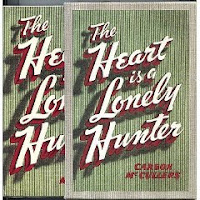 Yes, and in spite of the fact that Blogger setup never lets me setup quite the way I'd like to see it setup, I am still able to tell you that among the werds I've pounded in recent months are these two novels, Being There by Jerzy Kosinski, and The Heart Is a Lonely Hunter by Carson McCullers.

I have a specific and real reason for juxtaposing these two, although they are utterly different stylistically.

The central character of Being There is Chauncey Gardiner, depicted in the well-known film by Peter Sellers, and the cover of the book reminds us of this too. (This was a case of impeccable casting. No one could have played Chauncey better than Sellers.) Chauncey is, how would you say it, simple-minded. The house where he lives and gardens has been his shelter for as long as he can remember. When his "guardian" dies he is thrown out into the complicated and sophisticated world with nearly nothing.

Chauncey is neither complicated nor sophisticated. His thought processes are quite limited. But after suffering a slight injury in traffic (mostly his own fault I think…) he is adopted by a wealthy couple with very high connections.

Chauncey has no life experience other than his garden. And television. Therefore, everything he says relates in one way or another to these things. In his simplicity he utters profound truths, but he is not actually answering the questions people ask him. Nevertheless, everyone accepts his comments and before long he has become famous. He advises the president, he attracts women, everyone comes to dote on his words.

In The Heart Is a Lonely Hunter there is also a central character, named John Singer. Singer is deaf and dumb. He has one dear friend named Spiros Antonapoulos, also deaf and dumb, and they live together in a small town in the southern US. Antonapoulos is also feeble-minded and Singer does his best to take care of him. But eventually he fails and through the machinations of Antonapoulos’ cousin, Antonapoulos is taken away to an asylum. Throughout the novel, Singer single-mindedly focuses on somehow helping Antonapoulos.

Meanwhile, he attracts the attention of four people in the town: an alcoholic labour radical, a black doctor with a mission to educate his people, the owner of a bar/restaurant, and a fourteen year old girl. One by one each of them begins to visit him. They all come to talk, which of course he can’t do. So he “listens”. And they tell him their dreams, their hopes, their fears and frustrations, their rage and their sorrow.

Now I come to what it is about these two novels that makes me put them together. In both of them, the central character is a sort of empty vessel who comes to be filled by the other characters. In both novels the supporting cast members project their own thoughts and beliefs onto the main character. Chauncey Gardiner becomes the wise man with the universal truth (when all he’s really talking about is his own garden which he misses very much) and, in the course of The Heart Is a Lonely Hunter a raft of rumours arise in the town about the nature of Singer’s past and his current life. In the end, no one knows the real Chauncey Gardiner, nor the real John Singer. Everything about them has been dreamed up by someone else. And imagine the shock of Singer’s four friends when Singer kills himself after finding out that Antonapoulos has died.

I can’t help but turn this into a bit of dharma. Is this not what we are all doing most of the time…making up stories about who we are, who our friends are, what our lives are? I don’t know about you, but I personally find that most of the stress in my life revolves around what I project outward…beliefs, desires, resentments, anxieties…in other words, the things I am making up about other people or situations.

Carson McCullers’ characters, in particular, were tormented by their inability to mould people in their own images or according to what they thought was right and necessary. We’re constantly trying to stuff the world with ourselves!

Better to just let it be.

I so agree, Larry. I have read neither of the books, but read with interest your description. When you came to how others made or dreamed up the character, I thought , yes, that's what we all do. And then you said it. It is true. You could say we are thought into being, by others how they shape us, and by how we then think of ourselves.

I'm not sure how it is with babies. They seem to start as empty vessels and depend on what we pour into them. But I've also noticed that they do come with something that is their own, not possibly yet picked up in this life. I guess that can be cultivated or destroyed?

Did you know that there is a place in this world, (leave it to me to forget where) where women try hard to eat as much as they can and be as fat as possible because that's what men want of them there? Thin girls are in for staying single. The men however are expected to be slim. They better stay away from beer I guess...LOL

I like Peter Sellers as actor. I can so see him play that roll, even though I did not see the film.

Talking I forgot one point that had come to mind. Hans due to his M.S could hardly speak. He lost the words he needed and had to think of replacements. (Which he did amazingly well for a long time.)But he could just sit somewhere, being quiet, and people would come to him, often down and out people, native people, and they would talk to him and told him of all their wishes and sorrows. He never said much, just listenend. And I know he meant to those people what they saw in him. I bet a book could be written with all the different characteristics brought into being by the ones that put their trust in Hans.

I opened a new book to read. Two quotes introduced it. It struck me how they fit in with what is being discussed here. It happens to me so often that I fall into a discussion and then the next thing I read seems to be a continuation of my thoughts. Herman Hesse 's theory was that "Books come to you."

"The oldest preserved maps of the world originate from, Babylonian times, that is, from the third millennium before Christ. On these maps, that Earth is depicted as a flat disk floating on the ocean. Babylon is the centre of the disk. To make a centre of power the centre of the world, just because it is one's own, is essentially a religious act.
Gerhard Staghun, Das Lachen Gottes

If God did not make us then we must make ourselves.
Leon Rooke, the Fall of Gravity

The book is Reading by Lightning by Joan Thomas. 383 Pages of "Werds" waiting for me.